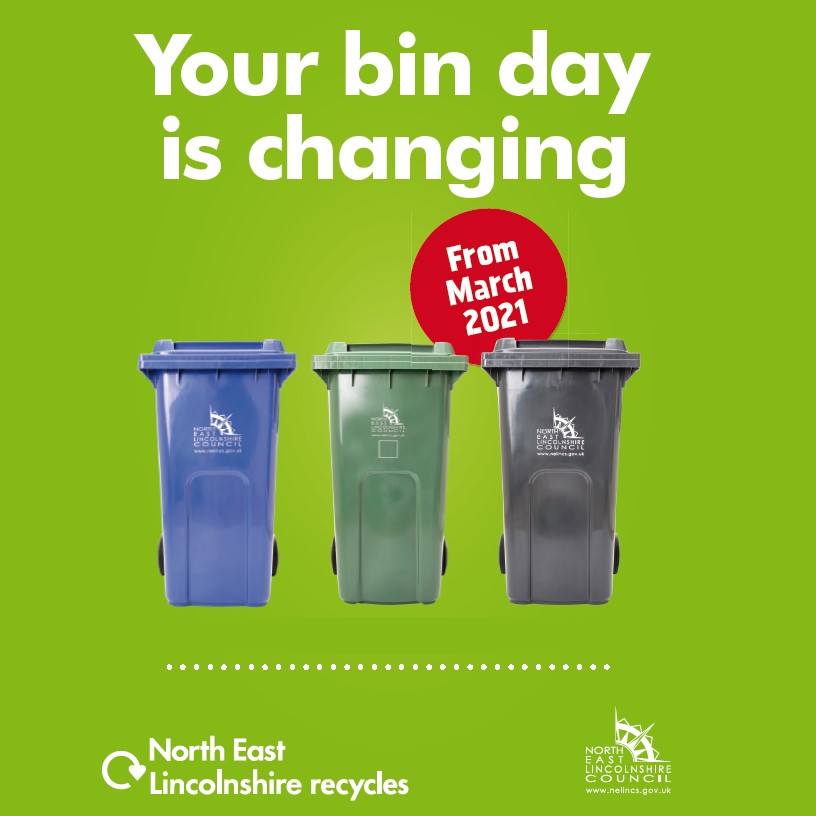 Waste and recycling collection days in North East Lincolnshire are changing from 8 March.

North East Lincolnshire Council is posting a new bin day calendar to all households in the borough.

From 22 February, people can check their dates online at www.nelincs.gov.uk/bins

The Council kept collection dates the same during the deliveries of the new recycling bins, but this was a temporary measure until the roll out was complete.

Switching to a four-weekly collection schedule makes the rounds more efficient. It also helps reduce the time the Council’s vehicles are on the roads and keeps running costs down.

As well as changing the rounds, the Council will also take more types of plastic in the grey recycling bin.

From 8 March, please put plastic pots, tubs and trays in your grey recycling bin. Wash them first to stop your bin from smelling. The Council can’t recycle black plastics, they go in the green bin.

You can fit much more recycling in your bins by flattening cardboard boxes and squashing plastic bottles and drinks cans.

“We’re now delivering on the second stage of our project to revolutionise waste recycling collections in North East Lincolnshire.

“When we finished consulting on our waste strategy last year, the most strongly supported option for recycling collections was two recycling bins collected monthly.

“People also told us they wanted to recycle more types of plastic.

“We listened to what people told us and we’re now making that happen.

“The third and final stage of the project is to start a weekly food waste trial on one of our rounds later in the spring.

“We’ll use the information and experience gathered from this pilot to support the Government’s plans to introduce mandatory weekly food waste collections in England by 2023.

“We’re already seeing big increases in the amounts of recycling we collect since we introduced the new bins.

“I’d like to thank everyone who is making the effort to waste less and recycle more.”

The new bins are very large, with a volume of 240 litres. One of the new bins holds the same amount of recycling as about six of the old recycling boxes. People can fit more in their bins by flattening cardboard boxes and squashing plastic bottles and drinks cans.

The four-weekly collection represents an increase of 57 per cent capacity compared to two of the old blue recycling boxes collected fortnightly.

The four-weekly collection of plastic, cans and glass represents an increase of 29 per cent compared to amounts the average household previously presented at the kerbside using the boxes.

Next Article
A coffee machine, nappies and a duvet – just three random items found in recycling bins for paper and card
North East Lincolnshire Council started a trial on one of its bin rounds in December where crews leave red tags on bins when householders put the wrong things in them. During the first month of the trial, crews tagged a total of 156 bins. The most common items crews found in the tagged bins include...
Previous Article
Recycle more plastics – from 8 March
Recycle clean plastic pots, tubs and trays from 8 March Plastic bottles, tubs and trays go in your grey bin (or orange box) Bin collection days are changing in North East Lincolnshire Check your dates at www.nelincs.gov.uk/bins  New collection calendars for homes across the borough More and more households in North East Lincolnshire are recycling....