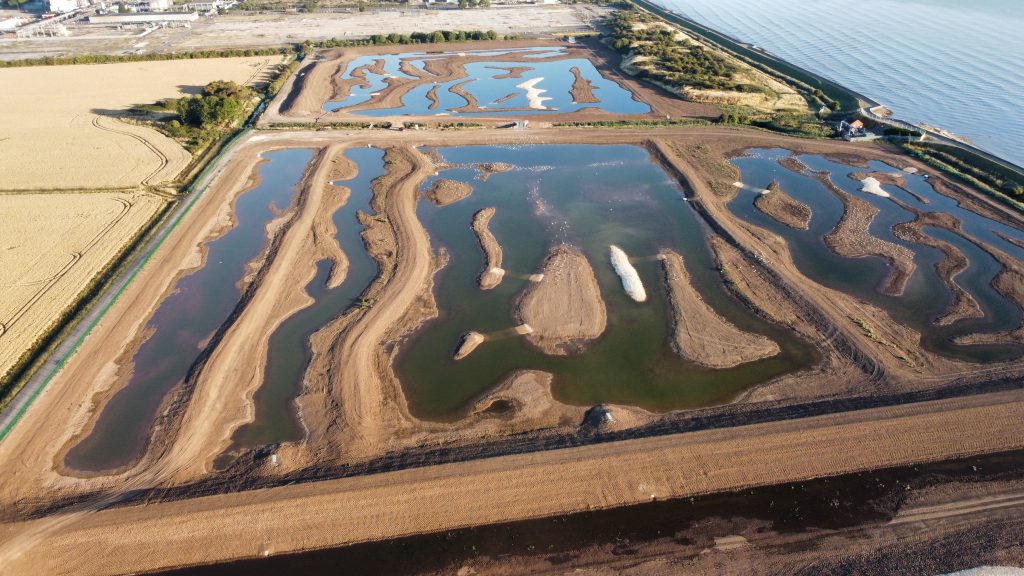 On the shores of the Humber Estuary in North East Lincolnshire, a new haven for wildlife is starting to appear.

In this interview with Roger Wardle, who heads up a specialist consultancy that creates these sites, he explains the aims behind the site and how these are built.

The Humber Estuary is a huge often forgotten about but diverse habitat. From the beaches and sand dunes, to the saltmarsh, mudflats and lagoons, the area is home to a wide variety of wildlife.

The estuary’s rich habitats are teaming with birds, insects and animals. That importance is demonstrated by the area’s recognition and protection by international, EU and UK law.

The area is designated as a Ramsar site, a Wetland of International Importance. It is also a Special Protect Area (SPA) for its birds, as well being a Special Area for Conservation (SAC) and European Marine Site. Since 1988 UK legislation has protected the area as a Site of Special Scientific Interest (SSSI).

Many wading birds use the Humber estuary as a “stopping off” point on their migration journeys where they can feed on the very rich invertebrate food source on the mudflats.  Large numbers of golden plover, lapwing, black tailed godwit, curlew and others also stay all winter to benefit from the relatively mild climate combined with a reliable food source revealed twice a day by the tide.  Eventually most migrate back to their Northern breeding grounds in the spring.

“Novartis Ings” site is the second significant wildlife haven being built in North East Lincolnshire primarily for waders. The first, the nearby Cress Marsh site, was built in 2018 and has already attracted a good range of wildlife including the return of breeding wader species.

Novartis Ings is ideally located directly adjacent to the estuary.  It has been created following the transfer of 35 acres of land, free of charge, from the pharmaceutical giant, Novartis Grimsby. They left this as their legacy to the local community after manufacturing at the site next door for over 70 years. This is boosted by another parcel of land formerly owned by Solenis, in total around 18 ha or 20 football fields.

Why is this being done?

In years to come, much of the hinterland of the Humber estuary will attract economic industrial and other developments.

Both Novartis Ings and the Cress Marsh have been created as part of the £42m South Humber Industrial Investment Programme that has already seen the creation of the new link road between Grimsby and Immingham, and a purpose built business park on the A1173 near Immingham with MyEnergi as the anchor tenants.

As a condition of developments, mitigation land must be set aside especially for roosting waders. These birds require wide open undisturbed sites ideally with a mosaic of shallow water with spits and island where they can roost safely at high tide. The Council has taken this innovative approach of building the “mitigation” sites before they are actually needed in terms of the development process.

Man-made sea defences were created in the area many years ago along with additional drainage improvements so that the area between Grimsby and Stallingborough became more “useful” in terms of farming, housing and industry.

However, over time, this also meant that the marshland and open farmland associated with the Humber estuary hinterland was reduced. These mitigation sites are creating specially designed and protected areas for waders close to their feeding grounds, but must be free from disturbance. The close proximity of the site and short flight saves the birds’ precious energy. This is particularly important when birds are stressed by bad weather, recuperating from a long migration flight or building up condition ready for migration and breeding in spring.

The birds’ behaviour is driven by the tides, feeding when the invertebrate rich mudflats are exposed, usually twice a day, but then birds are displaced as the water returns.  The waders fly over the sea defence to find somewhere to roost and rest in relative safety until the tide once again goes out.  Just like humans, birds prefer to take the easy option, if available by flying the least possible distance. This also conserves energy that also helps with survival and ability to migrate and breed. This is why we think this site, right on the edge of the Humber, will be a success.

You can think of it a bit like the estuary being a motorway service station that closes at every high tide.  The Novartis Ings site providing the essential accommodation to rest up until the next opening time.

The site will be providing wet grassland that is in mosaic with a storage lagoon, scrapes, islands and spits with slightly higher points to help the birds spot potential predators. Appearance to some will be a rather open and bare habitat but that is just what the wader’s need and are adapted to as a means of reducing predation.

It is a low rainfall area and very well drained with modern mostly artificially pumped systems. This poses a problem that is addressed by removing or blocking up the onsite drainage to help raise the water table, but without impacting neighbours.  Extensive excavations are also undertaken to transform the virtually flat land into one with undulations where the low areas form shallow surface water habitats. The water also surrounding a variety of island like features that helps protect the waders from ground predation.

Additional water is required because precipitation alone is inadequate. This will be harvested from the Mawmbridge Drain just before it would otherwise be discharged into the Estuary, with no additional demand on the local water supply system. Some of that water will be stored in the lagoon and released in dry times to increase the habitat’s resilience to drought.

What birds are likely to use the site?

The primary design of the site aims to provide a reliable wader roosting area free of disturbance with essential short vegetation within a wide-open habitat to which they are adapted.

Oystercatcher, lapwing, redshank and other waders used to breed in the area but are now very scarce or don’t breed at all locally due to a lack of suitable breeding habitat. This new site although primarily designed for roosting is likely to provide renewed opportunities for lost breeding waders to return.

Look out for the iconic Lapwing and their easily seen breeding displays that usually start in February. That is followed by a quieter period whilst vulnerable eggs are being incubated to hatch towards the end of April, when the birds fearlessly defend against predators by mobbing them.

As the habitat develops it is hoped that other species will also breed such as ring plover and even possibly terns if the numbers of gulls is not too high.

Some islands, especially in the lagoon, have gravel and shell toppings that benefit wader roosting by simulating natural features associated with the estuary but are also good for breeding waders and other potential species.

Pyewipe Estate just down the road takes the local name for the Lapwing indicating that in the past they were common in the area.

We’ll also be introducing cattle to the site from spring to autumn to help control the vegetation – the target species for this site much preferring short grass or bare ground. The cattle also make large footprints at the water’s edge creating micro-habitats for lots of insects that the birds subsequently feed on, not to mention the large biomass of invertebrates that live on dung pats.

When the site is complete soon, it will add to the locations interest for people to come and watch a range of birds, not just waders.

How to watch the birds

Autumn, winter and early spring, especially when the tide is in should see significant flocks flying in and out of the site,  but easily overlooked once landed. They will be easily visible from the edges and the sea wall, better still with binoculars.  As with all sites like this, we would ask that people respect the site, keep quiet and generally try to reduce bird disturbance.

Waders can be fickle creatures and flocks are especially vulnerable to disturbance.  Once the most nervous bird takes flight it panics them all. The tall green fencing around the site, in part helps to break up the shape of people and pets.

We have laid things out primarily to meet the bird’s needs otherwise they will not benefit from the site.  However, there is also good observation from the boundary or sea wall. With up to 160,000 birds sometimes present in the estuary, and more passing through, large flocks are possible. This is usually around high tides when you may be lucky to see impressive coordinated close formation flying known as murmurations, more often associated with starlings.

Even before it is finished a flock of a 100 or so curlews are already using the site.

Only time will tell – it might not be an overnight success, but we are very optimistic that the site will be a significant environmental contribution in conserving the waders of the Humber.