Crew of the Year winners announced! 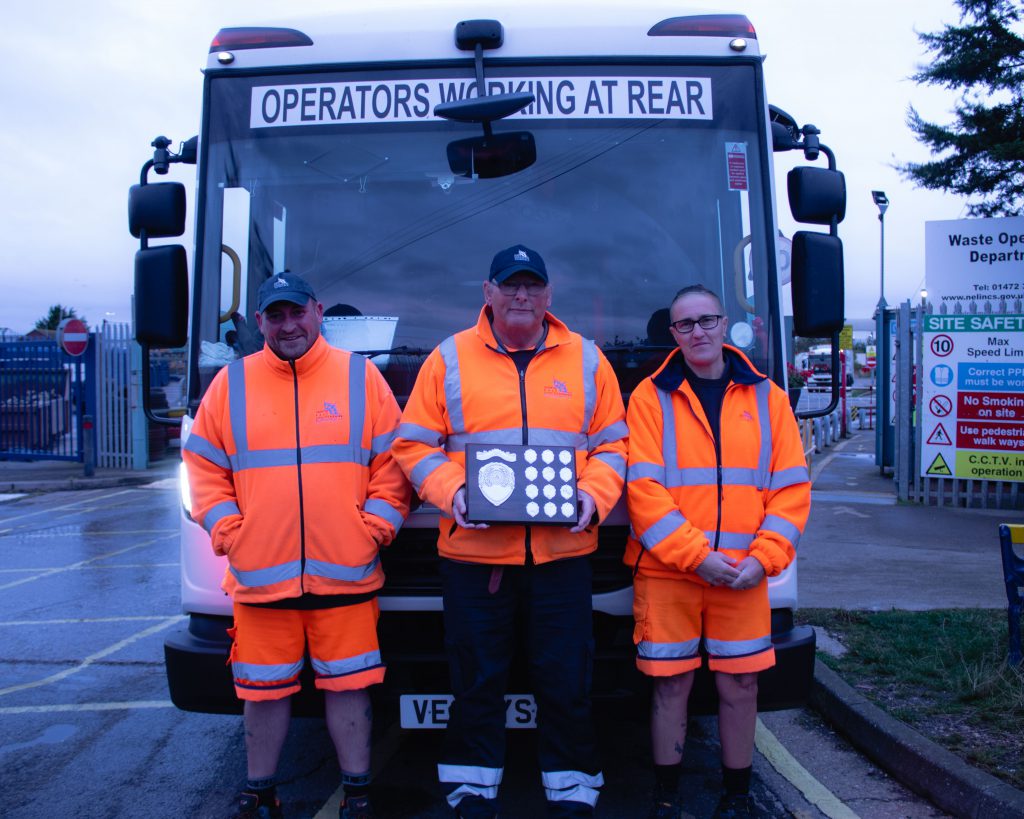 Nominations are in and your Crew of the Year has been decided!

More than 100 entries were made as the public shared the love for the heroes on their doorstep.

Two awards have been given:

John Jacobsen, Kim Saunby and Pat Higgs are the waste crew who have been awarded The Joe Jorgensen Crew of the Year Award – an award that will continue the legacy of bin worker Joe who passed away earlier this year with cancer. Joe joined the waste crew in 2012 and had been working with the council since 2008. A procession of bin wagons lined the streets in March as a special message on his wedding day, which took place after he was told he had terminal cancer. A special mention was made to Joe during the nomination process: “Belated Joe had a big smile on his face, always willing to help out. He worked until the day before he got ill. Unfortunately, he is no longer with us but he is so sadly missed by many due to his smiles and his waves. He deserved this binman of the year award posthumously.”

Thanks to Docks Beers, John, Kim and Pat will receive a prize of their choosing, either a brewery tour or a table with drinks included at one of their live events. They will also receive a £20 worth of Love2Shop voucher each, a certificate, as well as a trophy which will stand proud at the Gilbey Road Depot.

From staying with an elderly man until an ambulance arrived after he had fallen, to raiding their packed lunches to find a chocolate bar, and getting a child a bin lorry colouring book for Christmas – the team really has gone above and beyond to make a real difference in the community to put smiles on people’s faces.

Ian MacDonald has received the Special Recognition Award after receiving several nominations from the public recognising the impact he has had when out on the rounds, putting smiles on people’s faces. One nomination described how he would always come and chat with her son and see if he was alright. He will receive £40 worth of Love2Shop vouchers, a certificate and plaque.

What did you have to say about John, Kim and Pat?

“I wanted to nominate Kim Saunby in particular and the crew she works with. During lockdown, my little boy races to the window as soon as he hears the bin lorries. They always wave to him and make a fuss of him. He drew them a picture during lockdown to say thank you, and the staff raided their own packed lunches to give him a chocolate bar to say thank you. At Christmas, we wanted to say thank you to the crew and Kim returned with a colouring book for him with bin lorries on. He was absolutely made up. Just to conduct their jobs with such a positive persona really does make our day and always so friendly and polite. Kim really is a star!”

“My son has stood outside and watched the bin crew since the day he can walk. He absolutely loves the bin lorry and crew. They took the time to wave to him and speak to him. He can’t talk and is currently going through assessments but this has not stopped the crew from really engaging with him taking their time with him which makes him feel so special. We really appreciated the fact they go above and beyond for him. We even follow them to the end of the street and they beep their horn when leaving. When they thought they was changing rounds, they got him his very own bin lorry which he sleeps with every night and is very special to him. We really think they should be nominated as I can’t thank them enough for what they do for our son.”

“John Jacobson and team were amazing when my Dad had a fall and came to our rescue. The crew helped an elderly man when he fell, they called an ambulance and stayed with him making sure he was ok and reassuring him.”

A special thanks is also given to Pete Mountford, Dave Camburn, Jason Vaughan, Neil Kirwin, Liam Carter, Nik Underwood and Steve Fox, after being individually picked out by members of the public in their nominations.

Councillor Stewart Swinburn, portfolio holder for environment and transport, said: “Our bin crews really do go above and beyond their line of duty. These nominations are great examples of how thoughtful and caring our bin workers are. Hearing about some of the stories of Kim, John and Pat really does touch your heart. It’s clear to see they really have made a difference to the lives of children in North East Lincolnshire.

“I’d also like congratulate Ian on his Special Recognition Award. Nominations made show how he really cares.

“These awards are so important to recognise the work our crews are doing on a daily basis, often without expecting anything in return and sometimes even getting abused by the public. We really should all remember to be kind and appreciate the heroes on our doorstep.”