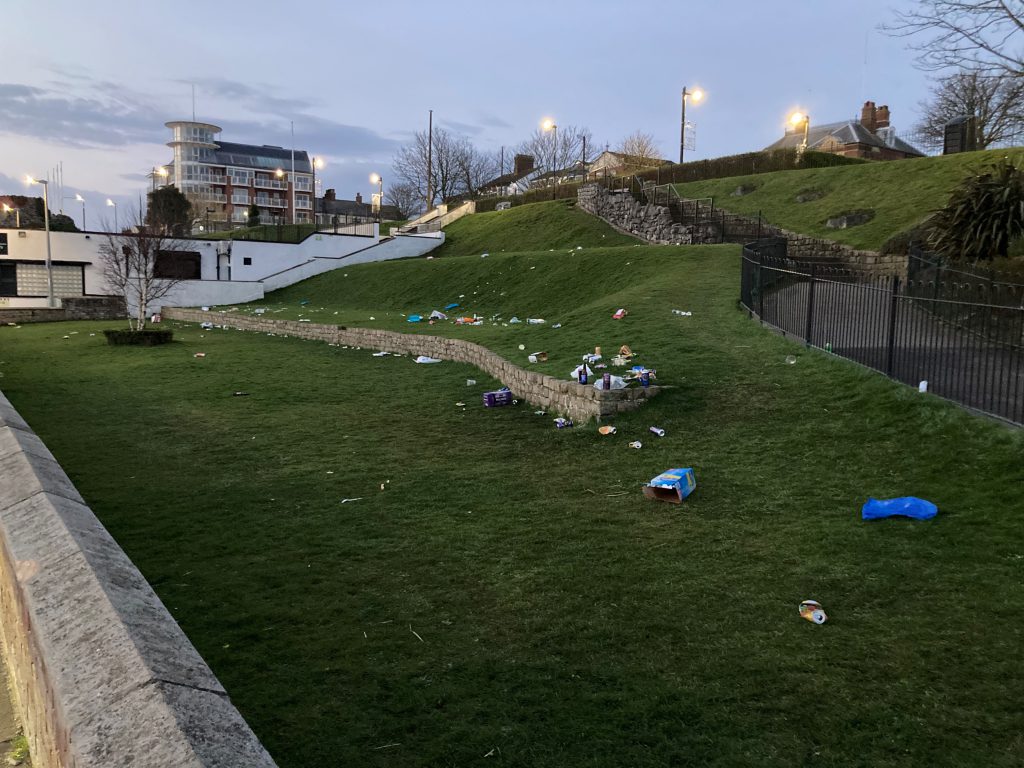 Enforcement officers fined 35 people in Cleethorpes this week for littering.

In addition to fining people, they also praised and encouraged children and other people for picking up their litter and putting it in a bin.

Officers talked to a group of youngsters who threw a bike into Sydney Park pond and safely retrieved it.

Members of the team also spoke to more than 200 dog owners to remind them about picking up dog mess and keeping dogs off the main beach from Good Friday. All officers wear uniform and carry an identification card.

Cleethorpes has more than 60 litter bins along the Promenade – including newly installed sets of extra-large bins just a few steps from the beach and Ross Castle.

On Tuesday and Wednesday, North East Lincolnshire Council deployed almost all its street cleansing staff to the resort to clear up the mess.

This takes them from their regular duties and means they can’t get on with their day-to-day work, such as emptying litter bins in other parts of the borough.

So far this week, the team has been called to clear up broken glass and other mess in the following places:

There was not as much mess left on Wednesday evening as the night before.

Street cleansing staff are key workers and perform an essential role in keeping the area clean and safe during the pandemic.

They have had to adapt the way they work due to the coronavirus restrictions, which makes their job even more difficult.

“People love and value Cleethorpes beach so it’s all the more disheartening to see it treated like a rubbish dump.

“We’re grateful to our street cleansing team for clearing up such unacceptable amounts of litter and enforcement officers for carrying out patrols.

“The beach, along with parks and local beauty spots, provide people with much-needed open space during the pandemic. These places are vital for our physical and mental well-being.

“Nobody wants to see them treated with such contempt. When people leave litter, it makes the place look a mess and it harms wildlife. If it’s left on the beach, it can wash into the sea where it poses a danger to fish and other marine animals.

“Most people would not treat their own gardens like this so why do they think it’s acceptable in public spaces?

“Coronavirus is still very much a threat, and like many organisations, we still face challenges to maintain essential services such as street cleansing during the pandemic.

“Enforcement officers are on patrol during Easter Weekend. Please, put your rubbish in a bin or take it home.

“If you choose to drop litter and mess up the beach, the parks or the streets, we will fine you.”

Dogs are not allowed on the central beach between Cleethorpes Leisure Centre and Wonderland from Good Friday to 30 September.

Dog walkers will be fined £100 if they take their dogs on the restricted section of beach between those dates.

Information about the restrictions can be found at the main entrances to the beach.

Cleethorpes Beach is a Site of Special Scientific Interest (SSSI) and is home to a number of rare habitats and bird species.

Wildlife along the stretch of coast can be disturbed by dogs, which can cause distress to and damage the health of the birds living on the beach.

Migratory birds, such as curlews, need to conserve energy and build up their strength in preparation for long journeys.

A borough-wide PSPO covers not picking up dog mess, not carrying the means to pick up after your dog and to put your dog on a lead when told to do so by an authorised officer.

There are also PSPOs for specific areas with conditions that exclude dogs from play areas and keeping dogs on leads during organised events.

Officers are putting up signs in parks and other places to warn dog walkers that they face a fine if they don’t carry a dog poo bag or other means to pick up after their dogs.

Enforcement officers are making spot checks and will offer advice and educate dog walkers about the means to pick up rules until the end of April.

During May, any dog walkers found not carrying a bag or other means to pick up after their dog will be given a verbal warning and from June onwards, they will be fined £100.