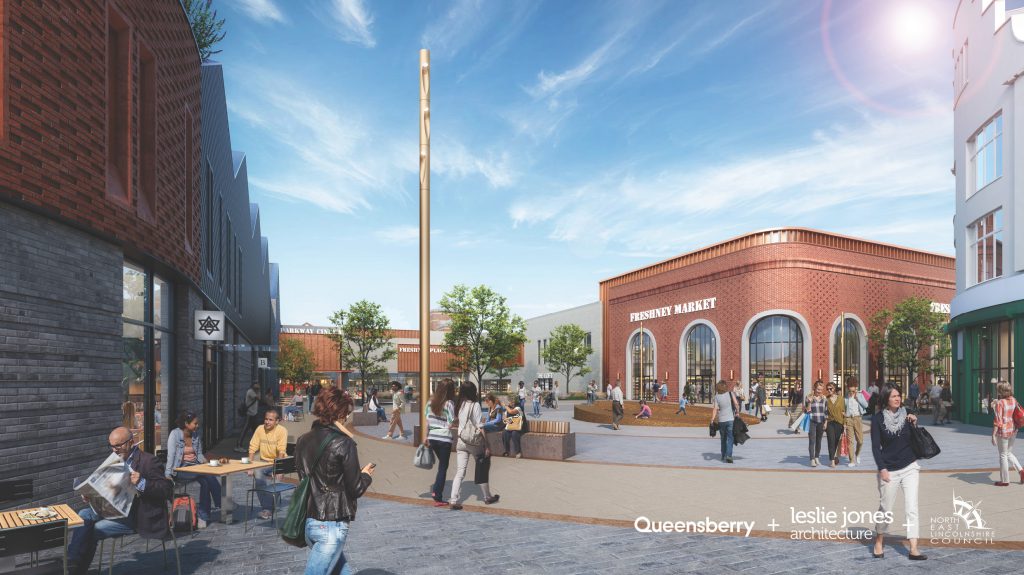 The planning application for a new market hall, a cinema and other leisure facilities at the Western end of Freshney Place have now been submitted into the planning system.

This is another opportunity for people to have their say on the scheme before it is considered by the Planning Committee in the months ahead, and is the time when statutory authorities can also submit their detailed comments.

As previously reported, the council has won significant grant monies for the transformation of the western end of Freshney Place, which it bought during the summer. The proposed leisure development will house a new cinema, with local and regional operator Parkway Entertainment Group coming in as an anchor tenant and pledging to provide a great venue to complement its offer in Cleethorpes.

The plans will also feature a remodelled entrance to the centre, which will be lined with units for leisure and eateries, and an entrance to a new and transformed Market Hall.

Prior to submission, public drop in sessions were held by the project team to inform residents and businesses what the scheme might look like if approved, as well as talking through the timescales for the various phases of the development.

During the consultation, the main issues highlighted by visitors included the leisure use of the area, parking once the improvements have been made, and the design, look and feel of the planned new buildings.

Alongside the plans for the Freshney Place development, North East Lincolnshire Council has launched a new project aiming to improve the town centre street scene. Focused on the Victoria Street West pedestrian precinct and surrounding streets, officers are encouraging owners of a relatively small number of street-facing properties to make improvements. They are writing to the owners of properties and advising them on the works needed to bring their buildings to an acceptable standard.

Work is also progressing on the Riverhead scheme, with the plans being put forward for approval by the Council’s Cabinet at the meeting next month. These plans do not require planning permission as it is permitted development on public land. If approved, work is expected to start in the early new year.

Cllr Philip Jackson, leader of the Council, said: “We have said all along that we are working to improve our town centres, to make them more attractive for people to live and work in. We have already seen the improvements to Garth Lane and St James’ Square completed, and now we’re working hard to deliver other elements of the Grimsby masterplan, as well examining opportunities to use empty spaces differently.”

The planning application can be viewed on the Council’s Planning Portal www.nelincs.gov.uk/planning, with reference DM/0979/22/FUL. If you have any comments on the scheme, these can be received directly through the portal.