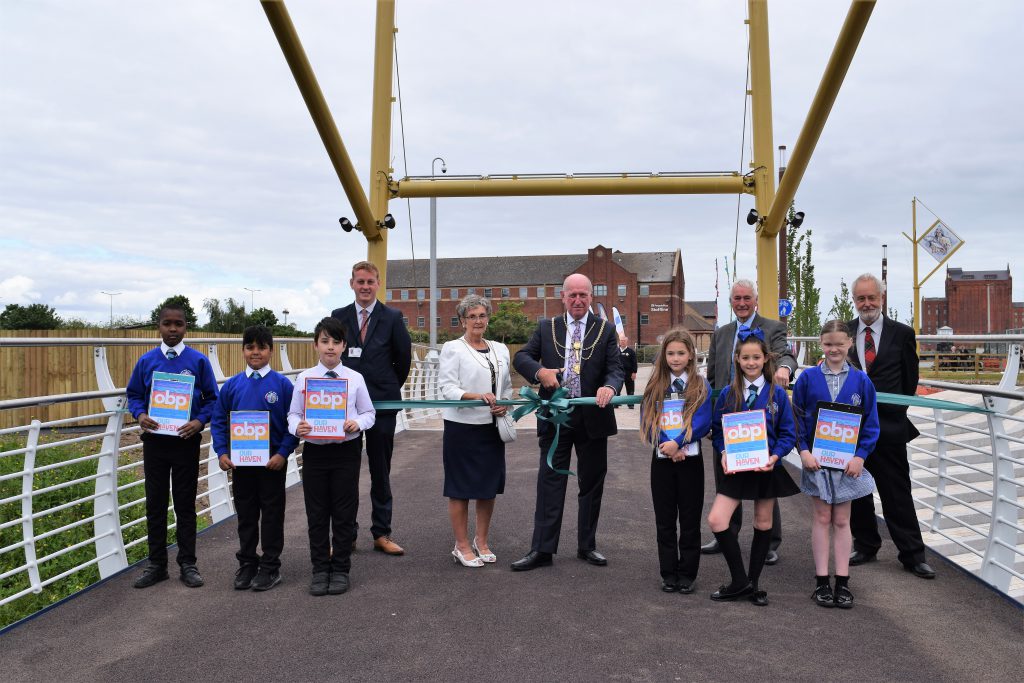 GRIMSBY’S new showcase footbridge, a statement of the massive town centre change taking place, has opened to the public today as works to the Garth Lane site near completion.

THIS morning (Tuesday 22 June), the Worshipful The Mayor of the Borough of North East Lincolnshire joined an official party that together stepped over the Garth Lane bridge for the first time, before making their way to the nearby Grimsby Fishing Heritage Centre. The opening coincided with an official celebration to mark the centre’s 30th birthday.

On their way the party saw the transformation of the whole area with the bulk of the work now complete, as part of the wider Garth Lane improvements. This includes tiered seating down to the water, new paving, lighting and CCTV, and landscaping.

Access to the river for water sport enthusiasts has also been improved – as reported Ebb & Flo have expanded their successful Cleethorpes paddle-boarding business to Alexandra Dock in Grimsby. Representatives from Ebb & Flo attended the official opening, along with people from the local community and those responsible for the design, management, and construction of the whole project.

The fish benches carved from the wood of the old willow tree are also in place, with more new furniture on its way. But it is the bridge that is the real centrepiece. Designed by acclaimed bridge architects SH Structures, its mast-like feature is a nod to the town’s heritage but also signifies how water remains an integral part of its future.

Delighted to see the near completion of the whole scheme and the bridge now open, North East Lincolnshire Council Cabinet member for economic growth, Cllr Callum Procter said: “This is a fantastic step forward for Grimsby in our aim to put pride back into the town centre. This whole area shows ambition and a vision to bid for and win significant grant funding to enable such change. I just want to take this opportunity to thank everyone involved in this massively significant project.”

Cllr Stewart Swinburn, Cabinet member for highways, added: “The transformation of the area is amazing, and will really start to connect the town centre with the Alexandra Dock area for pedestrians and cyclists alike – one of the key aims of the project is to help bring bits of our town together, and embrace the lovely waterfront we have.”

As reported work began more than a year ago with a total of £3.5m funding – £1.3m being secured from the former Humber Local Enterprise Partnership from the Local Growth Fund as part of the Government’s commitment to the Northern Powerhouse. More funding came from The Ministry of Housing, Communities and Local Government with monies released as part of the Grimsby Town Deal.

James Newman, Chair of the HEY LEP (the successor body to the Humber LEP), said: “We are thrilled to see the completion of this fantastic Grimsby regeneration project, including the opening of the Garth Lane bridge, highlighting how supportive the Local Growth Fund has been in revitalising towns all across the Humber region.”

David Ornsby, acting operations manager at the Fishing Heritage Centre, has been watching over progress from the museum over the last 12 months. “The last year has been a difficult one for all museums, not just ours, but I’m so pleased to see this special area open to the public again. We’ve been working on lots of things in the museum in the meantime, and will be working with the town centre team to encourage people to come to make the most of our 5* café, free exhibitions and award winning heritage experience.”

As part of the opening celebrations, and tying in with the cultural development work in the town, there will be a special cultural commission in the area. Local artist, Sean Rodwell, has created a special set of 4.5m flags which spell out the message Grimsby History in semaphore and Morse code. These will be accompanied by a set of flags from artist Wendy Meadley, whose work can be seen on her Flikr account – Wendy Meadley – Flickr.

The new space at Garth Lane is now open to the public. The remaining elements of the scheme will be installed in the coming weeks.

The project was managed by ENGIE, the council’s regeneration partner.