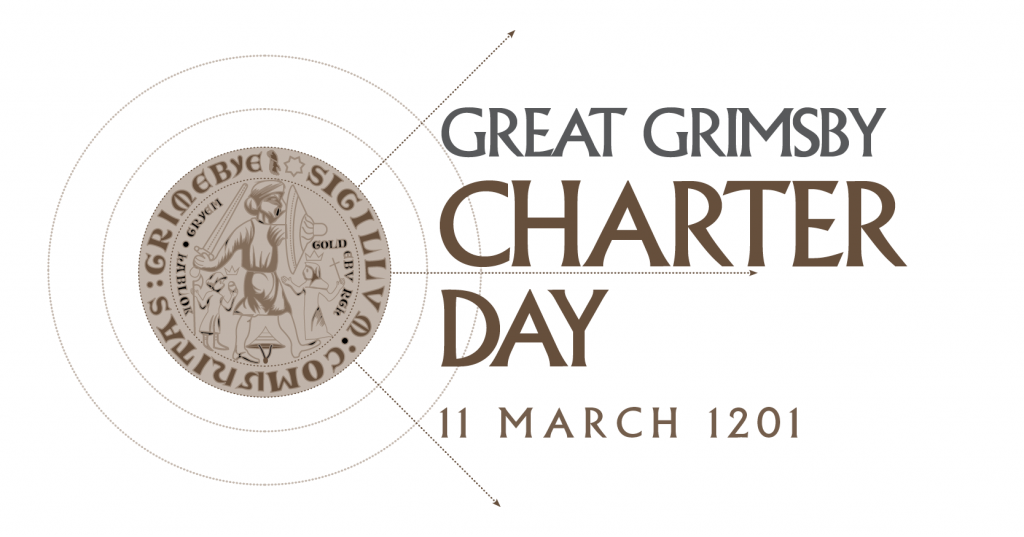 Lots of activities and events are planned to celebrate Great Grimsby Charter Day this year, but what is Charter Day, and why do we celebrate it?

One of the most significant dates in Grimsby’s rich history has to be 11 March. This is the date of the issuing and sealing of Great Grimsby’s very first Royal Charter, 821 years ago in 1201.

Great Grimsby Charter Day is an opportunity to recognise and celebrate the connection between the past and what we see and experience in the town today – because there are elements of the first Charter and those that followed over the centuries, that still exist in Grimsby life. Even the parts which we cannot see, the history that may sometimes seem ‘lost’, are being uncovered.

There is a range of things happening across the town to celebrate Charter Day, and there’s lots for everyone to take part in and enjoy!

Fascinated by the town’s Charter history, Cllr Callum Procter, Cabinet member for Economic Growth, Housing and Tourism, said: “Our past will always shape our future and that is why heritage is so important. We are continuing to work hard to re-invigorate the town’s urban areas and that includes a variety of cultural and arts projects, which will offer reminders of that past.

“We have some great stuff planned for this year to celebrate Grimsby and its past, and indeed its future. Watch out for more information about events through the summer coming soon.

“The anniversary of Grimsby’s first Charter is something we should be extremely proud of and it’s great to see 11 March being marked in our town’s calendar” he added.

But what is the Royal Charter, and what role does it play in modern day Grimsby?

In 1201, King John and his royal entourage witnessed the sealing of the borough’s first Royal Charter. At the time, Grimsby was one of only seven places in the England to have been granted this document, which defined the rights and privileges of the town, enabling it to govern itself and set its own taxes, essentially paving the way for local democracy and societal systems. This was 14 years before the landmark signing of the Magna Carta, which is seen as one of the most important documents in Great British history.

Who took on this responsibility?

At the time, responsibility of the town was handed to the ‘burgesses’ – local people who became the ‘free men’ of the town. Today, there are over 1,000 men and women who are direct descendants of the original ‘burgesses’, known as the Enrolled Freemen of Grimsby. They are a registered charity and continue to do great work in and around the town, including supporting the regeneration of Freeman Street and the East Marsh.

Under the Charter, the ‘burgesses’ were allowed to establish markets. Records show that there has been a market in Grimsby since the 12th century, and it received its own Royal Charter in 1604 from King James I. Fast forward to 1976, and Grimsby Top Town Market moved to its present location. Today, it is still operated under the provisions of the Royal Charter.

In the Charter of 1329, King Edward III had sanctioned the right to improve the navigation of the River Freshney, and in the 1340s a dock was excavated here, known as the West Haven. Today, this is the Garth Lane area of Grimsby town centre and it is currently undergoing major improvements as a part of the Greater Grimsby Town Deal Heritage Action Zone. The dock may not exist anymore but over the years, archaeologists have conducted excavations to find evidence of medieval maritime industry.