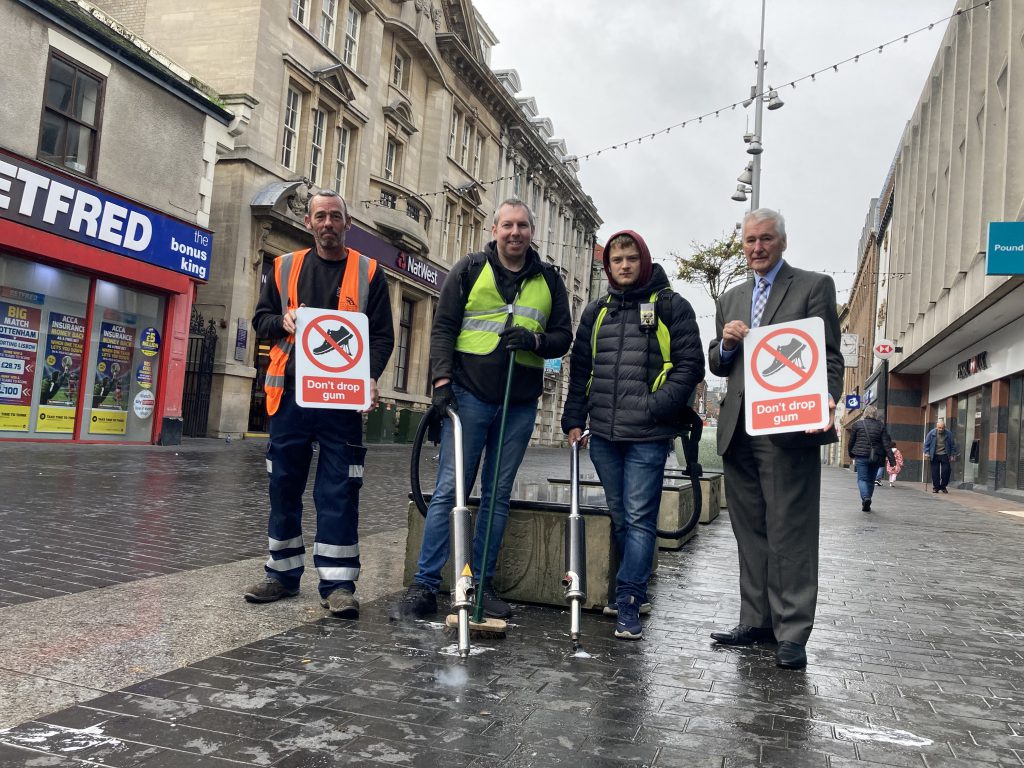 Chewing gum stains in parts of Grimsby town centre are being cleaned up this month as part of a national crackdown against littering.

Eco Removal Systems, a specialist cleaning contractor, are working in the main shopping area of the town centre to clean away unsightly chewing gum stains.

For about three-weeks, the team are working in the pedestrian area and surrounding streets to give them a good clean before Christmas.

They remove the gum stains using an eco-friendly detergent, made from sugar beet, which they carry in a container on their back. The detergent is heated and then squirted directly onto the gum to quickly vaporise it.

With this method, there is no need to cordon off pavements when they are working, so it’s less disruptive than a jet washer or similar.

Cleaning started on 18 October and is due to be completed by 31 October.

“We’re investing millions-of-pounds to give Grimsby town centre a new lease of life.

“We have ambitious plans and with all the investment coming in, there’s a growing sense of pride in the town and a desire to make positive change for the future.”

“People want a town centre that’s a lively, attractive and clean place to visit. That’s why we submitted a bid earlier in the year to the UK Chewing Gum Task Force and we received £20,000 to cover the cost of the clean-up.

“This is similar to a clean up we undertook in Cleethorpes last autumn, but it would be much better if people put their gum in a bin rather than leaving it to stain the streets.”

North East Lincolnshire Council was among the first recipients of funding as part of the Chewing Gum Task Force, helping to reinvigorate our country’s towns and cities by funding efforts to clean up streets.

Established by Defra and run by environmental charity Keep Britain Tidy, the Task Force aims to clean gum off pavements and put in measures to stop it being dropped in the first place.

Estimates suggest the annual clean-up cost of chewing gum for councils in the UK is around £7 million and according to Keep Britain Tidy, around 87% of England’s streets are stained with gum.

The funding is the first tranche of a package worth up to £10 million from major gum manufacturers including Mars Wrigley and Perfetti Van Melle to tackle chewing gum stains – the investment will be spread over five years.

Next Article
Riverside meadow set to become Grimsby’s newest nature reserve
North East Lincolnshire is set have a new Local Nature Reserve designated on grassland next to the River Freshney in the town’s Yarborough ward. Known as Freshney Parkway, the new Local Nature Reserve can be found east of Great Coates Road, between St Michael’s Church and the River Freshney. Back in the 1980s, the Council...