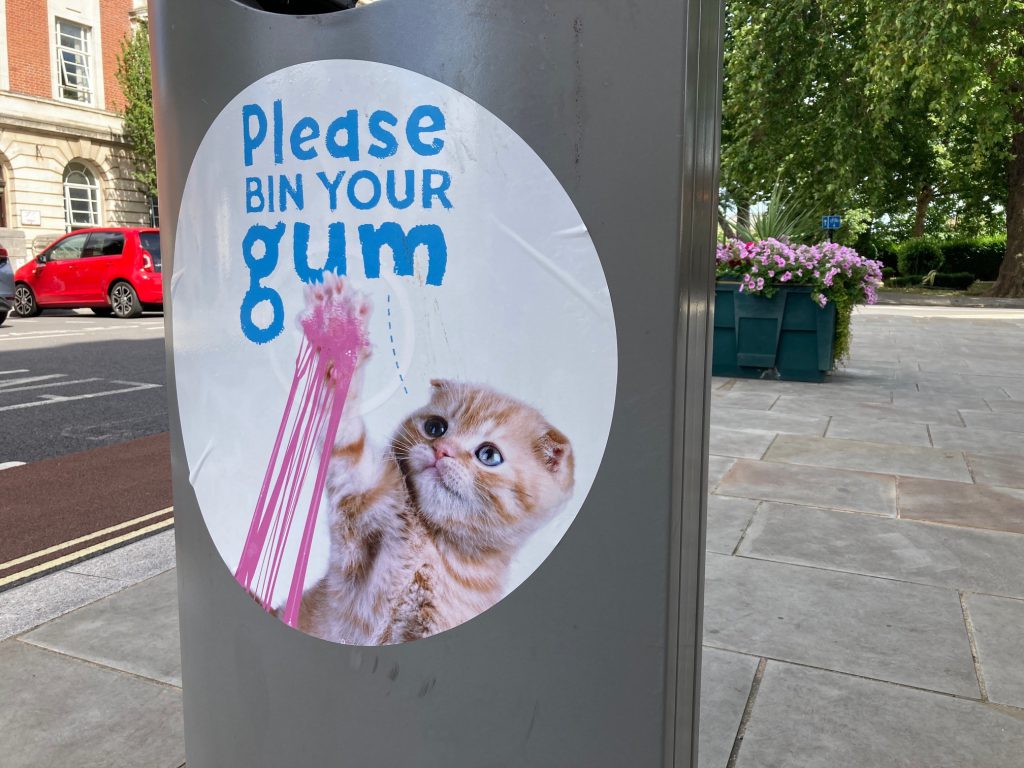 New Government action to crack down on litter on our high streets has been set out today (6 August), with more than 40 councils across the UK awarded grants of up to £70,000 to remove chewing gum stains.

North East Lincolnshire Council is among the first winners of funding as part of the Government’s new Chewing Gum Task Force, helping to reinvigorate our country’s towns and cities by funding efforts to clean up streets.

Established by Defra and run by environmental charity Keep Britain Tidy, the Task Force aims to clean gum off pavements and put in measures to stop it being dropped in the first place.

“It’s great news that our bid for this funding was successful. The £20,000 will be a big help for our street cleansing team and will improve the look of Grimsby town centre.

“We submitted a bid to help clean up the paving in Grimsby town centre, similar to what we did in Cleethorpes last year. We’ll be cleaning the paving in the next couple of months.

“Of course, it would be much better if people put their gum in a bin rather than leaving it to litter the streets.”

Estimates suggest the annual clean-up cost of chewing gum for councils in the UK is around £7 million and according to Keep Britain Tidy, around 87% of England’s streets are stained with gum.

The funding announced today is the first tranche of a package worth up to £10 million from major gum manufacturers including Mars Wrigley and Perfetti Van Melle to tackle chewing gum stains – the investment will be spread over five years.

“Littering blights our towns and costs taxpayers money. Working with responsible gum manufacturers, we are now giving councils extra help to clean up our cities and towns.

“This means we can double down on regenerating our high streets, boosting local economies and levelling up communities across the country.”

“This is an exciting new opportunity for councils to tackle the ongoing problem of gum pollution.

“The grants will allow councils to clean up historic gum litter staining in our towns and cities, as well as taking action to prevent people littering in the first place.”

“Mars Wrigley has invested in campaigns to tackle litter across the UK for many years. Through our partnership with Behaviour Change we have developed interventions proven to reduce gum littering which have already been used by over 100 councils.

“We are delighted to see these deployed as part of the Chewing Gum Task Force Grant Scheme and look forward to having many more councils on board.”

“As a manufacture of gum products we are aware of the unfortunate impact our products can cause to cities and towns. By working together with industry peers, councils, and customers, we can also help be part of the solution, helping to clean-up our streets and educating consumers on the importance of safe gum disposal.

“In addition, we are also working on our own campaigns to support our customers, with on-package signage and labelling to help work towards a circular, long-term solution.”

This forms part the Government’s new strategy to support the evolution and regeneration of high streets across the country, which includes 15 Town Deals totalling £335 million to fund community regeneration projects, the transformation of derelict buildings, and communities being given the chance to own local pubs, theatres, sports grounds and corner shops.

Littering is a criminal offence, and the UK Government has already bolstered local authorities enforcement powers by increasing the on-the-spot penalties for littering to £150 in England. Councils can also take offenders to court, which can result in a fine of up to £2,500 if convicted.

Through the Environment Act, the Government will be able to ensure that enforcement powers are used with a high degree of professionalism, whether by council staff or private contractors, and place our improved enforcement guidance on a firm statutory footing.

This forms part of wider government action to tackle litter and protect our environment.  We plan to launch a deposit return schemes for drinks containers, extended producer responsibility for packaging and consistent recycling collections which will transform the way we deal with our rubbish.

Next Article
Targeted patrols focus on Grimsby town centre
Targeted high-visibility patrols in Grimsby town centre are part of an ongoing effort to tackle issues in the area. Having listened to residents and businesses, officers will be carrying out foot patrols with partners in hotspot areas to deal with issues such as shop theft, public order offences and antisocial behaviour. Inspector Tom Stevens, of...
Previous Article
More than 500 fines issued in four months for littering, cycling in Grimsby’s pedestrian zone and other offences
333 fines for littering 77 fines for littering from a vehicle 52 fines for cycling in pedestrian zone in Grimsby town centre 52 fines for taking dogs on Cleethorpes main beach North East Lincolnshire Council has fined more than 500 people for messing up the borough since 1 April. A total of 333 fixed penalty...