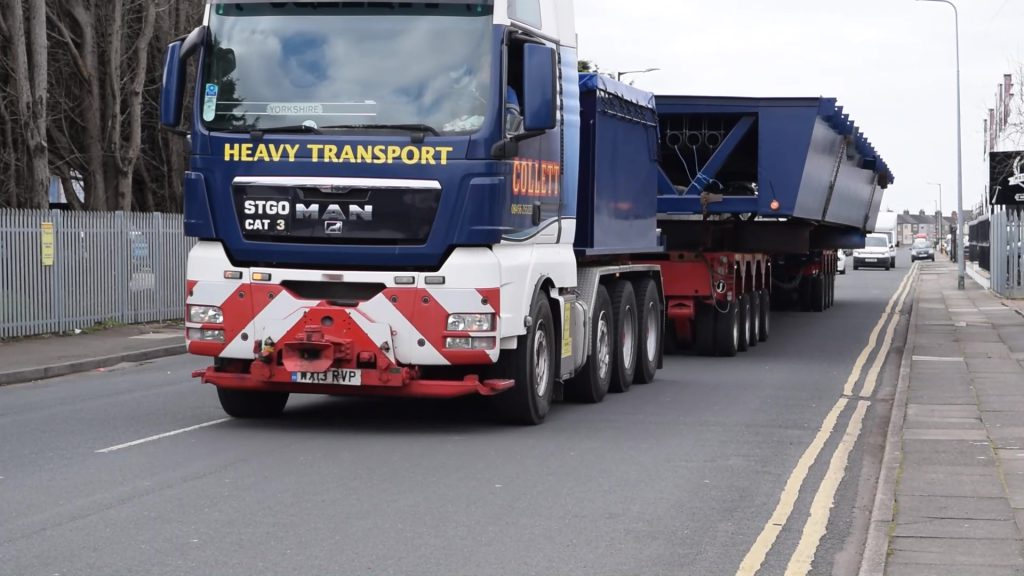 GRIMSBY’S new Garth Lane footbridge will be lifted into place across the River Freshney by large cranes, after being brought into town by specialist haulage contractors today, (Tuesday).

Householders had to temporarily move vehicles from part of the route, to allow room for the 30m-long by 5m-wide pedestrian walkway to be carried on a 37m-long transporter, with an accompanying police escort.

It started its journey from Scunthorpe this morning (Tuesday), where it had been painted, following its fabrication at the premises of SH Structures in North Yorkshire. The decorate masts and hand railings are being transported separately.

Once installed, the bridge will remain inaccessible for several weeks as detailed completion work is needed – the long-term pedestrian diversion will remain in place until then.

As reported, the new bridge is the central part of a £3.5m make-over of the area, which is due to complete late next month. It is supported by £1.3m from the Humber Local Enterprise Partnership from the Local Growth Fund as part of the Government’s commitment to the Northern Powerhouse. Further support has come from The Ministry of Housing, Communities and Local Government, with funding released as a result of the Grimsby Town Deal.

Next Article
A new view for Freshney Place
FAMILY leisure activities, a cinema and a new modern market with an overall entrance featuring open community space, green landscaping, cafes, and seating – that is what Grimsby’s new look town centre could look like. Artists’ impressions of how a transformed western end of Freshney Place, Victoria Street and the Bull Ring could be, show...