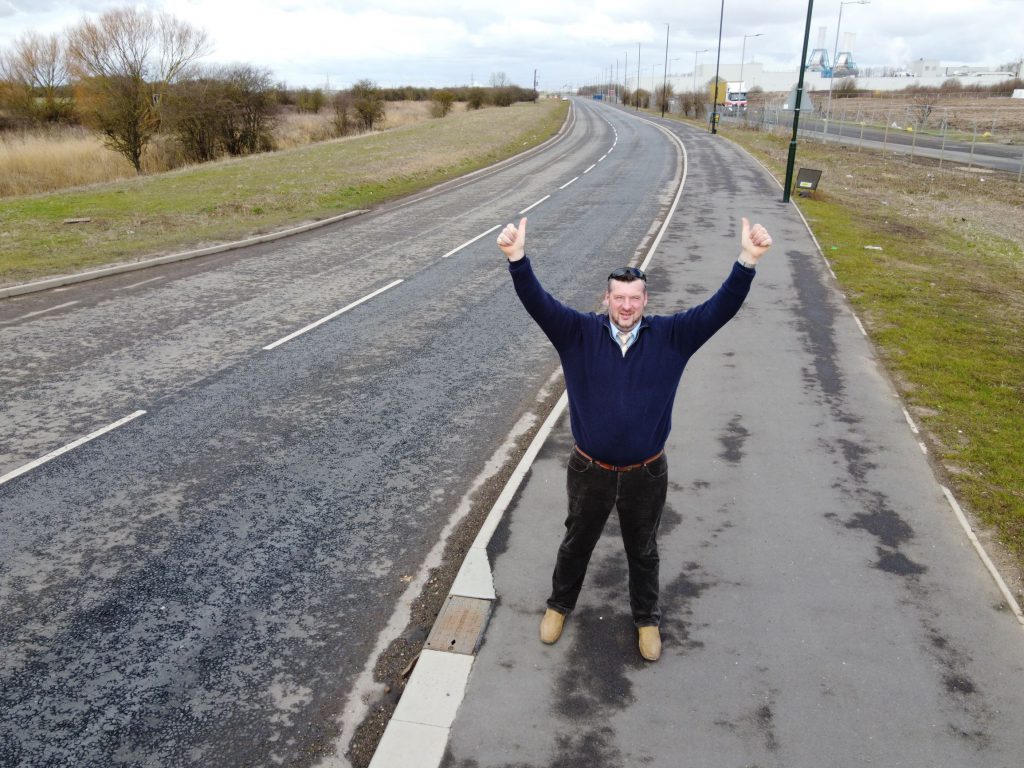 DELIGHTED business owners have joined leading councillors in praising the £8.5m new Humber Link Road, which is now open between Grimsby and Immingham.

Part of North East Lincolnshire Council’s £42m SHIIP (South Humber Industrial Investment Programme), the 96-week build was managed by the authority’s regeneration partner ENGIE.  It was carried out in three phases with the first phase opening-up a direct route to land with attractive Enterprise Zone status. The remainder replaced an unadopted stretch of private road ending at Humber Gate.

More than 100 trees have been planted along the fully lit stretch with thousands of tonnes of recycled products used. Bus stops, and cycle and pedestrian pathways have also been installed and it is set to become part of North East Lincolnshire’s new ‘cycle-superhighway’, a funded project to vastly improve the area’s cycle network.

North East Lincolnshire Council Leader Cllr Philip Jackson said: “The opening of this road is very much welcomed. It opens-up a tranche of land for future investment along the South Humber Bank, and supports the green agenda with a shorter route between Grimsby and Immingham taking heavy traffic away from the A180. It is also an example of the way in which we are investing in infrastructure right across the area.”

Cllr Stewart Swinburn, Cabinet member for Environment and Transport, said the road reflected the authority’s commitment to providing the right infrastructure for existing businesses to grow whilst attracting new development. The new road will now be adopted by the council.

“The opening of this road is a great advantage to both business and the community. With reduced travel time it offers easier access for everyone between the two towns and their ports. It is yet another huge improvement that has been realised thanks to the SHIIP programme, which along with Pioneer Business Park, the new myenergi building and the mitigation sites, just shows what can be done,” he added.

Funded with support from the Greater Lincolnshire Local Enterprise Partnership (GLLEP) as part of its commitment to SHIIP, local businesses have also praised the highway project.

Adrian Rowlands owns Enviro GY Ltd – an innovative green business. Sited on Humbergate just off the new road, called Energy Park Way, the firm recycles the equivalent 20,000 lorry loads of polystyrene every year for use as building insultation across the UK and Europe.

Daily collections are made at Grimsby Dock and with passage across to Immingham now easy, Adrian is looking at opportunities for expansion to the west. Further afield, he has established a relationship with Leeds City Council, which is pioneering domestic polystyrene collection for Enviro GY to recycle.

“There are still a lot of people who think that polystyrene cannot be recycled, but that is certainly not the case and we hope now that the message is growing. The direct route we now have to Immingham may well open up more opportunity and we certainly welcome that,” said Adrian.

Meanwhile Pat Doody, Chair of the Greater Lincolnshire Local Enterprise Partnership, added: “We are pleased to have invested £2m into this strategically important infrastructure scheme for the South Humber Bank. It will provide enhanced access arrangements to a number of new employment sites within the South Humber Gateway area, enabling new businesses to locate here and creating new jobs.

“The link road, which connects the ports of Grimsby and Immingham and reduces port traffic on other roads, was enabled via additional LEP investment of £2m towards the creation of strategic ecological mitigation sites in the area.

“Under the Government’s Getting Building Fund, we are also funding a cycle superhighway between Grimsby and Immingham to the value of £2.2m. Once all these schemes have been completed, £6.22m will have been invested in infrastructure between the two strategic port complexes by the Greater Lincolnshire LEP.”

Port operator ABP Humber is also extremely pleased with the new link between its two ports. Dafydd Williams, Head of Policy, Communications & Economic Development (Humber), said: “ABP welcomes the new road as it will bring even greater connectivity between our Ports of Grimsby and Immingham. The new infrastructure will not only benefit our business and other companies on the port, it will also reduce carbon emissions.”

As reported, SHIIP is the largest investment of its kind ever made along the South Humber bank with an aim of transforming the industrial fortunes of North East Lincolnshire. Supported by North East Lincolnshire Council, the GLLEP, the Humber Local Enterprise Partnership and the European Regional Development Fund, it also includes the new Pioneer Business Park where green energy firm myenergi will soon be moving, major improvements to the A1173, the award-winning Cress Marsh mitigation site, and the new Novartis Ings mitigation site.

What it takes to build a new road?

The Humber Link Road stretches from Moody Lane in Grimsby to Hobson Way, Stallingborough. During the 96-week build, there has been:

Next Article
TRO 20-16-02 – 24hr Rural Clearway – Bradley Road (Bradley) – 08 October 2021
The North East Lincolnshire Borough Council (Clearway) (Bradley Road) (No. 20-16-02) Order 2021 Notice is hereby given that on 06 October 2021 North East Lincolnshire Borough Council made theabove Traffic Regulation Order under powers contained in the Road Traffic Regulation Act 1984 theeffect of which will be as follows: Introduce a ’24-hour Clearway’ which prohibits...