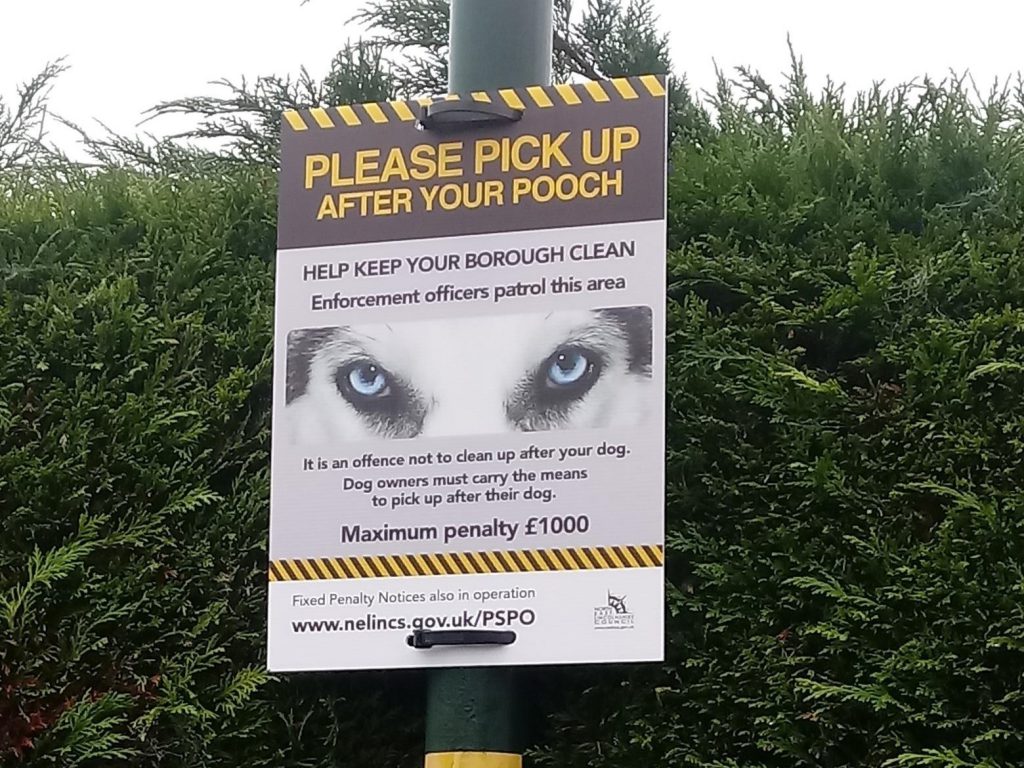 New signs are going up as part of a new campaign to remind dog owners to pick up after their pets.

Officers are putting up signs in parks and other places to warn dog walkers that they face a fine if they don’t carry a dog poo bag or other means to pick up after their dogs.

Enforcement officers are making spot checks and will offer advice and educate dog walkers about the means to pick up rules until the end of April.

During May, any dog walkers found not carrying a bag or other means to pick up after their dog will be given a verbal warning and from June onwards, they will be fined £100.

All officers wear uniform and carry an identification card.

As part of the campaign, people are also being encouraged to submit reports about dog fouling problem areas so enforcement officers can target their patrols more effectively.

Report dog mess problems to the Council using an online form at www.nelincs.gov.uk/dog-mess.

Remember to include details such as the location and the time of day when making a report.

“Most dog owners take their responsibilities seriously, it’s a shame that a careless few spoil it for the rest of us.

“We do not want people stepping in dog mess when they visit parks, the beach or other areas as the lockdown lifts and the weather brightens up.

“Enforcement officers are routinely stopping dog walkers to check they have bags to pick up after their pet. They will offer advice first but will start fining people in June.

“If dog fouling is a problem in your area, please use our online form to report it.”

Enforcement officers are patrolling areas where people are reporting dog fouling problems, including:

Weelsby Woods and several parks are among other places where people have reported dog fouling problems.

A borough-wide PSPO covers not picking up dog mess, not carrying the means to pick up after your dog and to put your dog on a lead when told to do so by an authorised officer.

There are also PSPOs for specific areas with conditions that exclude dogs from play areas and keeping dogs on leads during organised events.

The Council is also reminding dog walkers to avoid the main tourist beach in Cleethorpes from Good Friday.

Dogs are not allowed on the central beach between Cleethorpes Leisure Centre and Wonderland from Good Friday to 30 September.

A fixed penalty notice can (FPN) be issued to any person who breaches a PSPO, giving them an opportunity to avoid prosecution by paying a fixed penalty of up to £100.

Anyone found guilty of an offence in the Magistrates’ Court is liable, on summary conviction, to a fine not exceeding level three on the court’s standard scale of fines (currently £1,000).

Next Article
Dog walkers reminded to take responsibility for their pets this Spring
North East Lincolnshire Council is launching a new Spring campaign to tackle dog fouling and irresponsible dog ownership. Officers are putting up new signs in parks and other places to remind dog owners to pick up after their pets. People are also being encouraged to submit reports about dog fouling problem areas so enforcement officers...
Previous Article
Don’t mess up the beach – 35 litter louts fined in Cleethorpes this week
Enforcement officers fined 35 people in Cleethorpes this week for littering. Irresponsible people left the resort covered in litter ranging from broken bottles, cans and cardboard packaging to carrier bags and face masks. Officers patrolling in the resort issued 35 £100 fixed penalty notices for littering. In addition to fining people, they also praised and...