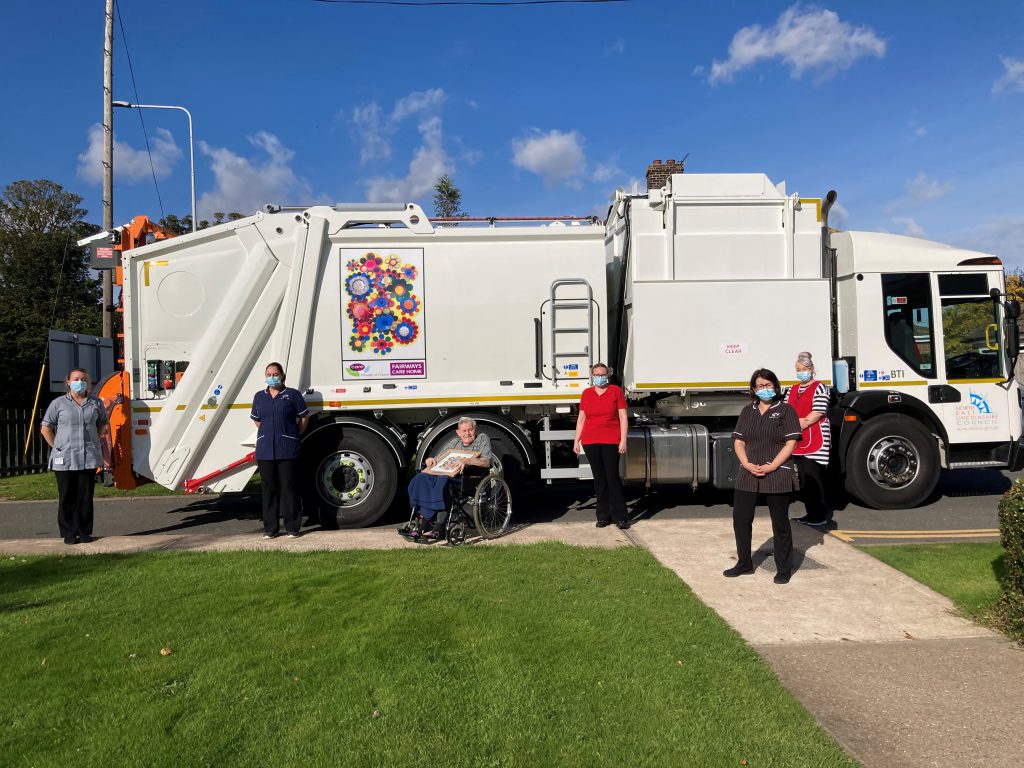 Residents at a Grimsby care home have had the chance to see their artwork up in all its glory on one of North East Lincolnshire Council’s new bin lorries.

Fairways Care Home residents submitted artwork and a name suggestion to the council’s bin lorry competition last year. As a result of being one of the winners, ‘Justin the Dustbin’ will now roll through the streets of North East Lincolnshire for everyone to enjoy.

The council visited the care home on Wednesday 7 October to show off the lorry to proud residents. The artwork was created by residents aged between 84 and 99-years-old.

Kim Butters, Operations/Registered Manager at Fairways Care Home said: “It is lovely to see our residents engaging with this community project. We didn’t expect to win, it was more about the taking part for us. Our activities coordinator Carolyn was instrumental in making this happen for the residents and the home.”

Violet added: “The lorry looks pretty big with our work on it.”

And Peter said: “It’s nice to see they are getting modern stuff. I’d like to have a go at driving it!”

Councillor Stewart Swinburn, portfolio holder for environment and transport at North East Lincolnshire Council, added: “This competition really was for all ages. We had entries from children as young as four-year-old, all the way up to the grand age of 99.

“I want to personally thank Fairways Care Home for getting their residents involved and for their fantastic name suggestion, Justin the Dustbin.

“It’s great that so many people took the time to enter the competition and help spread the word about how important it is to reduce waste and recycle as much as you can.

“I’d once again like to say a huge congratulations to all the winners of both the artwork and name suggestions.”

Many school children already have their artwork up on the new fleet of wagons, which have been rolling through the streets of the borough since July.

As a thank you, artwork winners have received a model bin lorry with their drawing on, as well as having their original artwork framed and returned to them.

North East Lincolnshire Council and its regeneration partner, ENGIE, are planning to carry out highway drainage maintenance on a section of Cheapside in Waltham, close to the Cheapside Training Ground. Works will be starting on Monday 2 November and are planned to take three days to complete. The works are required after observations found that...