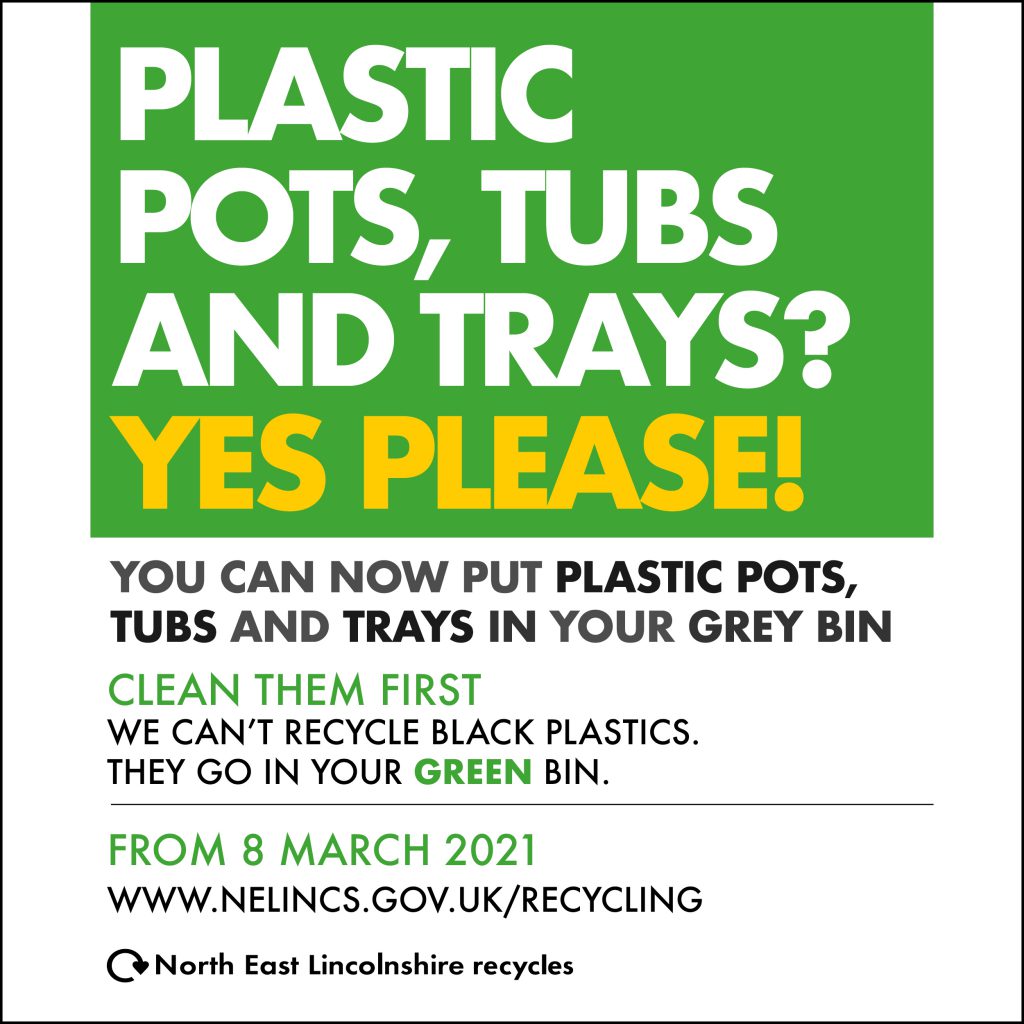 From 8 March 2021, households can recycle clean plastic pots, tubs and trays (except black plastic) in their grey recycling bin or orange recycling box.

The only plastics that used to go in the grey recycling bin or orange box were plastic bottles.

Now the Council is expanding the range of plastics to include items such as yoghurt pots, ice cream tubs, and food trays.

People need to clean them first to help stop smells in their bins. All films and lids should be completely removed from plastic items

Recycling processing plants also need the materials to be clean, otherwise the loads can be rejected.

People can fit much more recycling in their bins by flattening cardboard boxes and squashing plastic bottles and drinks cans.

“People told us they wanted to recycle more types of plastic when we consulted on our waste strategy last winter.

“Now we’re expanding the types of household plastics people can recycle at home.

“We’re already seeing big increases in the amount of recycling we’re collecting since we introduced the new bins.

“By recycling more, we can help protect the environment, help tackle climate change and reduce our carbon footprint.”

“In 2019, the Government published plans to overhaul the waste system, cut plastic pollution, and move towards a more circular economy.

“In the next couple of years, we’re expecting the Government to introduce deposit return schemes for items such as cans and bottles, and weekly food waste collections.

“They are also set to introduce a raft of measures to reduce plastic packaging and make producers more responsible for the waste they generate.

“By making these changes now, we’re putting North East Lincolnshire in a strong position to adapt to the proposals expected in the coming years.

“The next step in this project for us is the introduction of a weekly food waste trial on one of our rounds.

“Research we gather from this trial will help inform our decisions when we roll it out across the borough.”

Waste and recycling collection days in North East Lincolnshire are changing for most households from 8 March.

People can check their dates online at www.nelincs.gov.uk/bins.

As people recycle more and with the introduction of future weekly food waste collections, the need for bigger general household rubbish bins will reduce over time.

By 2035 the Government wants Local Authorities to only collect 35 per cent of the waste from households as general household rubbish and 65 per cent as recycling.

Under the Council’s overhaul of waste and recycling collections, smaller bins for household waste will be phased in gradually. For example, when a damaged bin needs replacing or when bins are delivered to a new build property.

The Council will not be removing 240 litre green bins from households and replacing them with smaller 180 litre bins.

The new bins are very large, they can hold up to 240 litres of waste. One of the new bins holds the same amount of recycling as about six of the old recycling boxes. People can fit more in their bins by flattening cardboard boxes and squashing plastic bottles and drinks cans.

The four-weekly collection represents an increase of 57 per cent capacity compared to two of the old blue recycling boxes collected fortnightly.

The four-weekly collection of plastic, cans and glass represents an increase of 29 per cent compared to amounts the average household previously presented at the kerbside using the boxes.