Recycling bins fit for the future 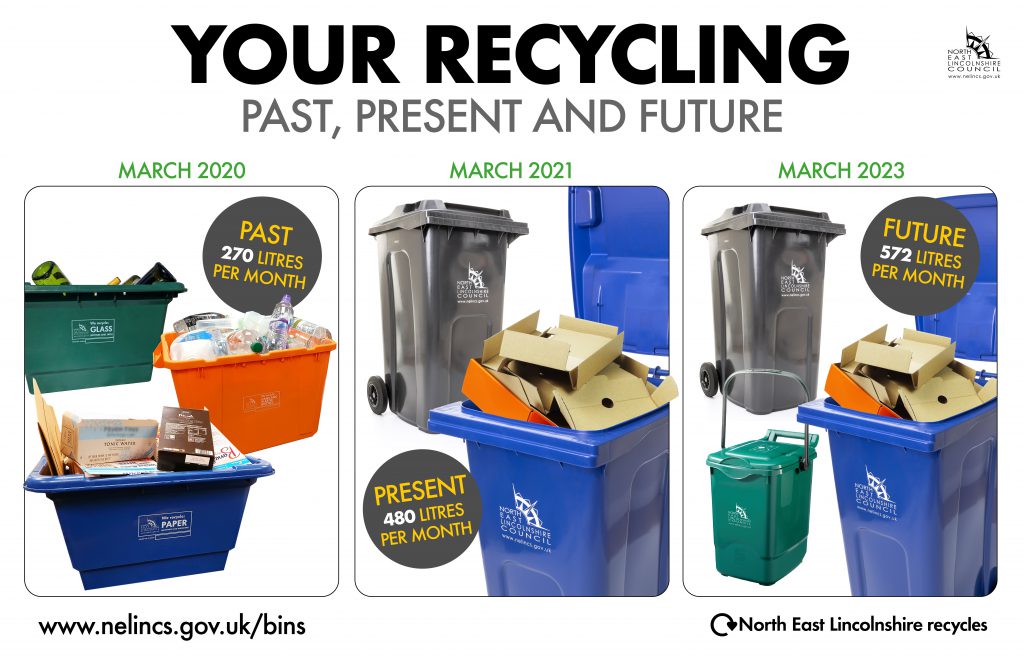 This time last year, households were using boxes for their recycling. The boxes had served their purpose, but it was time a new method was introduced.

Several factors influenced the decision to move from boxes to bins. First was a wide-ranging public consultation about the Council’s waste strategy and waste and recycling collections. The consultation ended in January 2020.

A total of 4,805 people responded – the highest response rate the Council has ever had for a public consultation.

People said they could not recycle as much as they wanted because the recycling boxes were not big enough. They also said they wanted to recycle more plastics.

Respondents also said the streets look a mess when the boxes tip over and the recycling blows away.

As part of the survey, people were also asked for their preferred option for how the Council collects their dry recycling.

Another major factor in the decision was the Government’s new resources and waste strategy. It set out plans to overhaul the waste system, cut plastic pollution, and move towards a more circular economy.

Under the plans, the Government announced that it wants councils to start weekly food waste collections from 2023. It also revealed big changes to put pressure on manufacturers to reduce plastic packaging and to seek views on a deposit return scheme for cans and bottles.

North East Lincolnshire Council’s new bins, new collection rounds and upcoming food waste trial, put the area in a strong position for the major changes expected over the next 14 years.

A household with two recycling bins now has more capacity for recycling than they did under the triple box system.  When weekly food waste collections are introduced, it will be even higher.

“We made the decision to switch to bins last March, the first bins arrived on doorsteps in July and by the end of November, nearly 70,000 households were using them.

“We gave about 2,000 households with little space to store the bins the option to keep the recycling boxes or use the bins. More than 400 chose the bins.

“Our shake-up of recycling collections considered the comprehensive feedback given in our waste strategy consultation and what we expected to hear about nationwide changes from central government.

“What was abundantly clear in the results of our consultation, is that people care passionately about the environment, they want to see less plastic pollution and recycle as much as they can.

“And I’m pleased to say people in North East Lincolnshire are now recycling more than ever.”

Waste and recycling collections changed on Monday 8 March. Households can check their dates online at www.nelincs.gov.uk/refuse-collection-schedule More than 37,000 individuals checked their dates in the last month.

From Monday 8 March, the Council also expanded the range of plastics collected at the kerbside to include items such as yoghurt pots, ice cream tubs, and food trays.

“We kept recycling collections the same during the roll out of the bins and to help people through the coronavirus lockdowns.

“This isn’t sustainable in the long term and last week we switched to new rounds.

“Designing new rounds is a complicated task. A specialist company takes data including every address we collect from, the distances vehicles need to cover, the amounts and frequency of waste and recycling collected, and works out the most efficient way to run the rounds.

“It means we are collecting waste and recycling from many households on different days and at different times than they are used to.

“We sent new calendars to households across the borough and local media have helped us remind people about the changes.

“Even so, it’s easy to forget and I ask everyone to be a good neighbour and remind people in their street if they haven’t put their bin out.

“This is also a big change for our crews. Many will be working in areas they are not used to so please be patient as they become accustomed to the new routes.”

Next Article
Top tips for visiting the tip
North East Lincolnshire Council is reminding people to be patient when visiting the Community Recycling Centres in Grimsby and Immingham. Community Recycling Centres, also known as CRCs or the tips, are busy during bank holiday weekends with hundreds of visitors per day. Both sites are run by North East Lincolnshire Council’s waste management contractor Newlincs...