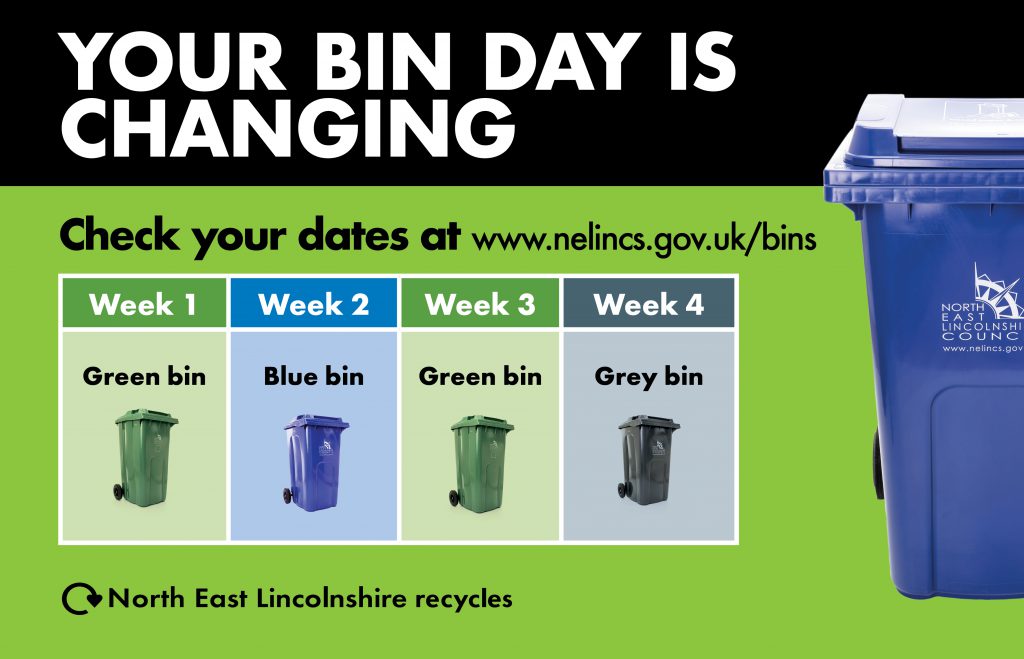 People can check their dates online at www.nelincs.gov.uk/bins

The Council sent a new bin day calendar to households across the borough.

The Council kept collection dates the same during the deliveries of the new recycling bins, but this was a temporary measure until the roll out was complete.

The new rounds are more efficient, help reduce the time the Council’s vehicles are on the roads and keep running costs down.

As well as changing the rounds, the Council will also take more types of plastic in the grey recycling bin.

From 8 March, please put plastic pots, tubs and trays in your grey recycling bin. Wash them first to stop your bin from smelling. The Council can’t recycle black plastics, they go in the green bin.

You can fit much more recycling in your bins by flattening cardboard boxes and squashing plastic bottles and drinks cans.

“Collection dates for most households are changing from Monday 8 March. Please check your dates online at www.nelincs.gov.uk/bins

“It’s easy to forget when there’s a change to the usual routine, please look out for your friends and neighbours and remind them to put their bin out if they don’t remember.

“This is also a big change for our crews. Most of the rounds have undergone significant alterations following an overhaul to make them as efficient as possible. Please be patient as we all get used to the changes.

“I’d like to thank everyone who is making the effort to reduce their waste and recycle more.”

As people recycle more and with the introduction of future weekly food waste collections, the need for bigger general household rubbish bins will reduce over time.

By 2035 the Government wants Local Authorities to only collect 35 per cent of the waste from households as general household rubbish and 65 per cent as recycling.

Under the Council’s overhaul of waste and recycling collections, smaller bins for household waste will be phased in gradually. For example, when a damaged bin needs replacing or when bins are delivered to a new build property.

The Council will not be removing 240 litre green bins from households and replacing them with smaller 180 litre bins.

The new bins are very large, they can hold up to 240 litres. One of the new bins holds the same amount of recycling as about six of the old recycling boxes. People can fit more in their bins by flattening cardboard boxes and squashing plastic bottles and drinks cans.

The new rounds represent an increase of 57 per cent capacity compared to two of the old blue recycling boxes collected fortnightly.

The new rounds for plastic, cans and glass represents an increase of 29 per cent compared to amounts the average household previously presented at the kerbside using the boxes.

Next Article
Top tips for visiting the tip
North East Lincolnshire Council is reminding people to be patient when visiting the Community Recycling Centres in Grimsby and Immingham. Community Recycling Centres, also known as CRCs or the tips, are busy during bank holiday weekends with hundreds of visitors per day. Both sites are run by North East Lincolnshire Council’s waste management contractor Newlincs...