Special new exhibitions celebrating historic links between Iceland, Grimsby and London go on display – with a copy of the Queen’s first official portrait! 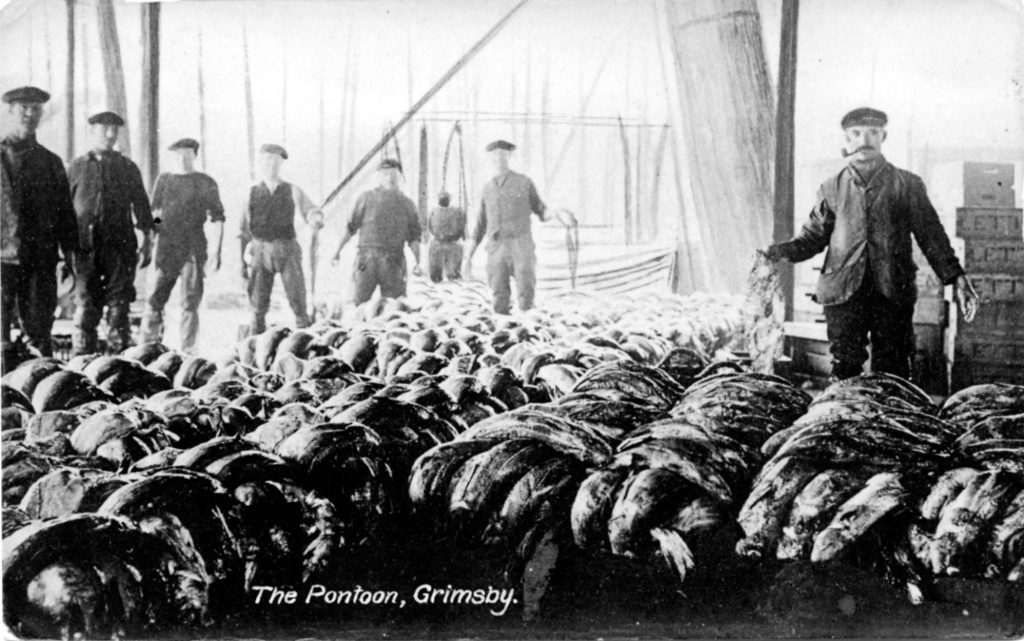 The Icelandic Ambassador, Sturla Sigurjónsson, and Embassy representatives will attend the opening. A selection of cartoons from the era of the “Cod Wars”, on grateful loan from the Embassy, feature in the exhibition which will highlight the special relationship that has been made between our town and the people of Iceland.

Representatives from London’s Worshipful Company of Fishmongers will also mark the occasion by the presentation of a copy of the oldest surviving Company Charter from 1547, to the Grimsby Fishing Heritage Centre.

The Fishmongers Company will this year celebrate their 750th anniversary. Billingsgate Fish Market, Britain’s largest inland fish market, has enjoyed a long-standing relationship with Great Grimsby and its fishing and processing sectors.

The Worshipful the Mayor of the Borough of North East Lincolnshire, Councillor Steve Beasant, will attend the opening where there will be a presentation of the Charter.

Sea to Sale explores the historical connections between Grimsby and the famous Billingsgate Fish Market, and how these two iconic areas developed thanks to the fishing industry. The exhibition features historical items loaned from the Fishmongers Company and Billingsgate Fish Market, including a replica of the 1272 Fishmongers’ Company’s first Royal Charter, alongside objects from the collections of Grimsby Fishing Heritage Centre.

Fish ‘n’ Quips explores the events of the First and Second Cod Wars with a display of over 40 satirical newspaper cartoons, on loan from the Embassy of Iceland in London. The exhibition features many original pieces from some of Britain’s best newspaper cartoonists, collected by Niels P. Sigurðsson, Ambassador of Iceland between 1972 and 1976.

Sturla Sigurjónsson, Ambassador of Iceland to the United Kingdom, said: “Despite the jocular term Cod Wars, these conflicts had serious implications. For Iceland, control and sustainable harvesting of fish-stocks was a matter of national economic survival. For the UK, the longstanding way of life of whole communities, not least in Grimsby, were at stake. However, strong feelings at the time never diminished the mutual respect and affinity felt on both sides. This is reflected in the contemporary drawings and in the relationship between the two countries today.”

As part of the exhibition, there will also be a copy of the Queen’s first official portrait on display, which will be in place until the end of the year. The original portrait hangs in the Fishmonger’s Hall in London. Only two copies of the original portrait have been made for the Queen’s Platinum Jubilee and Grimsby Fishing Heritage Centre is fortunate enough to be one of the venues receiving a copy. The copy will stand at around 7ft tall and will be displayed in the Muriel Barker Gallery in the centre.

Councillor Tom Furneaux, portfolio holder for culture, heritage and the visitor economy, said: “It is wonderful to reinforce the historic connections and friendships between Great Grimsby, the Icelandic Community, the Worshipful Company of Fishmongers and Billingsgate Fish Market. This exhibition brings us together again, in different times, to reflect upon our shared heritage. It is our pleasure to host this exhibition, opened with Icelandic Ambassador Sturla Sigurjónsson, representatives from the Fishmongers Company in their 750th year and Billingsgate Fish Market.”

David Ornsby, operations manager at Grimsby Fishing Heritage Centre, said it was a privilege to welcome the Ambassador of Iceland and Embassy representatives to the centre, which remembers Great Grimsby’s fishermen and the vital role they played for the town.

“We promote our rich local heritage, but equally important is to acknowledge and celebrate the connections and friendships that we enjoy today as a result of our past”, said David.

Louise Bowen, collections officer at the centre, who has helped put the exhibition together, said: “We are delighted to have secured generous loans from the Fishmongers Company and the Embassy of Iceland for these exhibitions. The replica of the 1272 Royal Charter and copy of the famous Pietro Annigoni of Queen Elizabeth II from the Fishmongers Company are stunning objects which tell a very important story. The collection of over 40 Cod War cartoons from the Embassy of Iceland provide a unique insight into a significant part of our mutual history. We are grateful to both organisations for loaning these objects to be enjoyed by our visitors. They will sit alongside objects from our fantastic collection of ship models and artwork.”

The exhibition will run from Thursday 9 June until the end of December between 10am and 4pm, except on Mondays. Admission is free.

The exhibition coincides with several events that have been put on by local organisation CatZero over a number of weeks between May and June to celebrate Grimsby’s fishing industry.