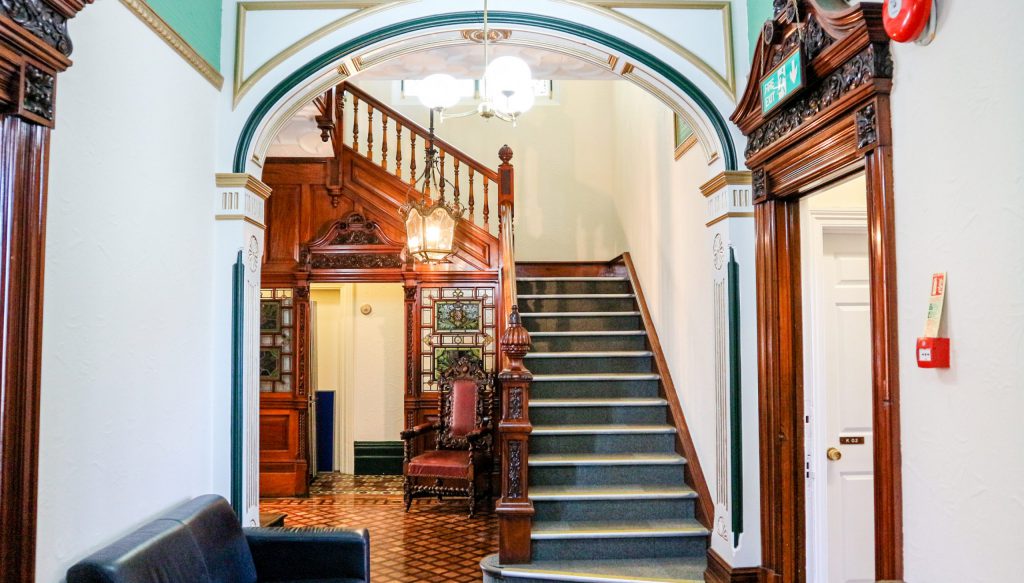 Ever wondered what’s behind the doors of the Knoll in Cleethorpes, home to the Armed Forces Major Events team?

You might have already visited Blighty Café in the building on Knoll Street and had a glimpse of some of the beautifully restored flooring in the entrance hall.

But thanks to some great technology, you can now have a virtual walk around the building and see some of the other stunning features in the other rooms, rarely open to the public.

As part of the Heritage Open Day work this year, a full 3D scan of the interior of the Knoll in Cleethorpes has been taken of the building which offers a fully accessible view of the building and shows the amazing restoration work done in recent years. You can access this scan from https://my.matterport.com/show/?m=M6GWAZprzFZ from the weekend.

Alex Baxter, Managing Director of AFMET, said: “It has taken some real work, investment and dedication to restore this building back to its former glory. During the restoration, we’ve found some real treasures, like the original parquet floor in the entrance hall as well as some plasterwork features and original ceramic tiles that had been hidden for decades.

“We are now the custodians of this building, but it’s had a rich history, and hopefully the work that we’ve done will sustain its life for future generations.”

Work by heritage groups has uncovered some of the rich history of the building. Completed in 1898, the first occupants of the building were the Kelly family, Henry Kelly Sr and his wife, Ann Elizabeth, nee Moody, whom he married nearly 30 years earlier. It’s with thanks to them that the following has been extracted from their research.

History of the Knoll

From humble beginnings and a broken family (in modern terms), Henry had become a director of the newly-formed Great Grimsby Steam Trawling Company Limited in March 1881 – a company that went from strength to strength to satisfy the growing public demand for regular supplies of fish.

By July 1885, Henry Kelly had become interested in politics, Chairing the Cleethorpes Liberal Association and in 1892, standing unopposed to represent Cleethorpes on Lindsey County Council alongside George Doughty, George Moody and Joseph Smethurst, other familiar names from history.

By the mid-1890s, Henry was a successful businessman, JP and councillor. The Kelly and Moody families worked together to raise money to support the local hospital. Henry died in the Knoll in 1909, leaving his estate, worth more than £4m in today’s money to the family and his property to his wife, Ann Elizabeth.

His son, also Henry Kelly, took on most of his father’s roles, including becoming an Alderman on Cleethorpes Council. He purchased the property after Ann Elizabeth’s death in 1934, and lived there until his death in 1939. The building then passed to Henry’s nephew, Walker Kelly Carter, a barrister and eminent QC who spent most of his life in London.

The Knoll was acquired by the local council in the 1940s, for use as offices, but with Walker’s career taking him away from Cleethorpes, it would have made no sense to keep hold of The Knoll and so its time as a family home came to an end.

The house was entrusted to the Council to be used for the benefit of the public and it is easy to believe that this family would have made such a philanthropic gesture.

The local council has occupied the building since the 1940s and has since transferred to the Armed Forces Major Events Team under a community asset transfer.

It is now a place where the AFMET deliver the Armed Forces Community Covenant, “a promise by the nation ensuring that those who serve or who have served in the armed forces, and their families, are treated fairly”, and where the community can meet and receive any support they may need.

To read more about the history of the building and the family, visit the Friends of Cleethorpes Heritage web page: https://sites.google.com/site/friendsofcleethorpesheritage//news/thefolkswholivedonthehill-thekellyfamily

On Saturday, 11 September, Blighty Café will be open and offering Victorian Cream Teas, and a Punch and Judy Act will be held on the front lawn of the Knoll building, playing three times through the day.

Heritage Open Days is England’s largest festival of history and culture, bringing together over 2,000 local people and organisations, and thousands of volunteers.

Every year in September, places across the country throw open their doors to celebrate their heritage, community, and history. It is an opportunity for people to see hidden places free of charge. This year events will take place across the country between 10 and 19 September, with a number of North East Lincolnshire places taking part.

Events are being added to the Heritage Open Days website all the time, so it’s worth keeping an eye open for more events, and if you can’t get out and about, there’s plenty of online content you can access from anywhere in the world. Visit www.heritageopendays.org.uk for more information.