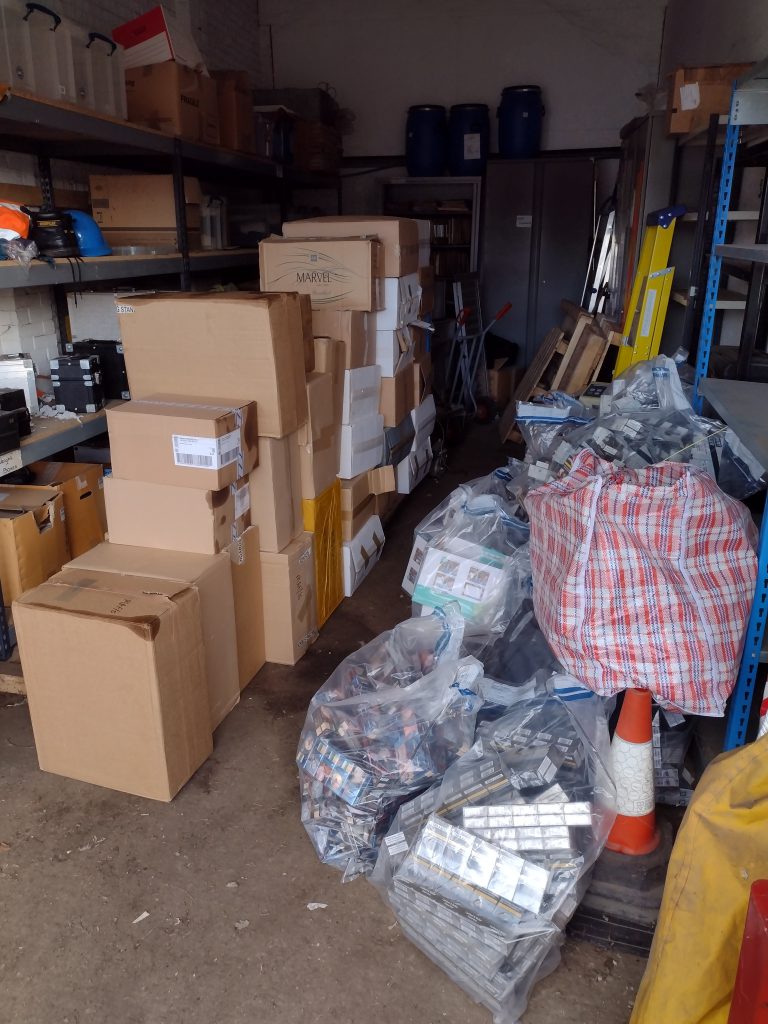 Trading Standards officers from North East Lincolnshire Council have seized a haul of illicit cigarettes and tobacco which was found in a residential property in Healing.

Trading Standards officers, along with support from Humberside Police’s Community Team, executed a search warrant on the morning of Sunday 21 November.

Officers were responding to information they had received from the public.

As a result of the search, officers located and seized approximately 375,000 illicit cigarettes (over 18,500 packets) and 14.5 kilos of illicit tobacco (290 pouches). The vast majority of the products were located concealed in the loft.

All of the cigarettes seized fail to conform to the Reduced Ignition Propensity regulations, meaning they do not self-extinguish if left unattended, therefore increasing the risk of house fires.

These products have an approximate legitimate value of more than £210,000 and a street value of approximately £97,000.

Councillor Ron Shepherd, portfolio holder for safer and stronger communities, said: “This is the largest illicit cigarette haul our Trading Standards officers have seized and I’d like to thank them for continuing to crackdown on the issue of illicit cigarettes and tobacco.

“These products do not meet safety standards and are putting lives at risk. We know illicit and fake cigarettes do not comply with the Reduced Ignition Propensity requirements and won’t self-extinguish, so are likely to start a fire.

“When you buy these products, you could be putting your own health at risk. Not only has no duty been paid on them but they’ve not been tested to ensure they’re safe.

“You can make a difference by reporting any suspicions you may have to Trading Standards on trading.standards@nelincs.gov.uk or call (01472) 326299, option 3.”

Neighbourhood Beat Officer PC Phil Eayres added: “Whilst this type of offending just looks like us taking cheap cigarettes off the streets, we are doing this to protect you.

“When you buy these products, you could be putting your own health at risk as these products are not tested to see what they contain.

“Counterfeit or illicit tobacco can contain all kinds of harmful substances; from brick dust to rat poison.

“Offending of this nature has also been linked to funding organised crime gangs and modern slavery operations in the past.

“We will seek every avenue to disrupt these types of crimes, to protect the public.”

The occupants of the property in Healing will be interviewed at a later date.

This latest operation brings the total number of illicit cigarettes and tobacco seized by North East Lincolnshire Council – since the commencement of Operation Nightshade, and latterly Operation CeCe – to 1,261,048 cigarettes and 735 kilos of hand rolling tobacco. This would have an approximate legitimate value at today’s prices of £1,098,300 and a street value of approximately £477,072.

Next Article
Christmas tree lighting events in Cleethorpes this week
This year, Cleethorpes will be illuminating its Christmas tree on St Peter’s Avenue on Friday 2 December. The Christmas tree has been sponsored by Parkway Cinema and characters from their forthcoming Panto, Pinocchio, will be attending for you to meet plus music and entertainment. Alongside the event, an evening Christmas Makers Market will take place at St Peter’s church...