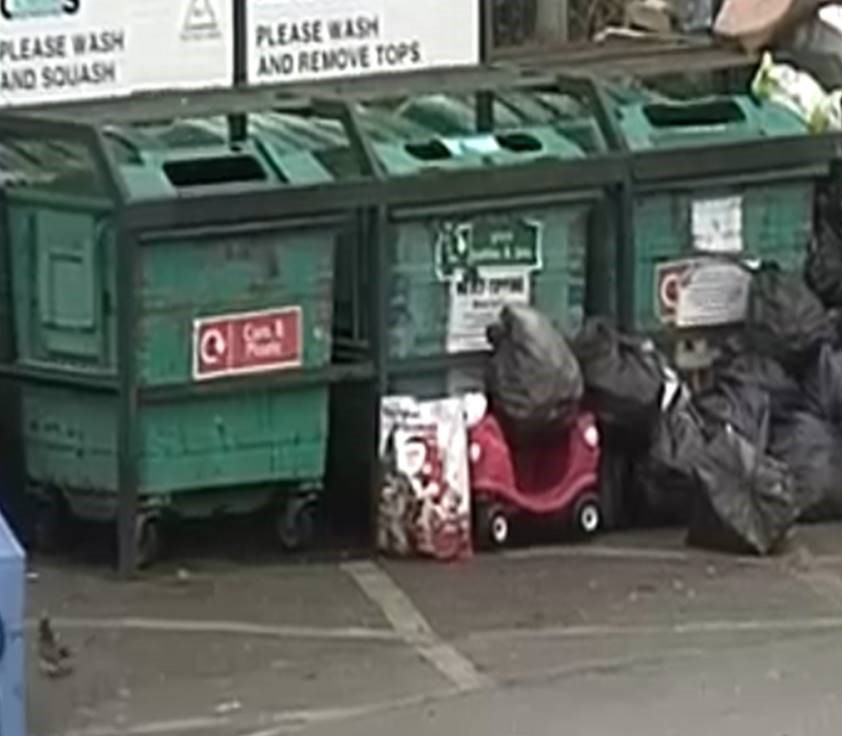 North East Lincolnshire Council has successfully prosecuted a Grimsby woman and a Cleethorpes man as part of an ongoing crackdown against fly-tipping.

The first incident happened on 18 May 2019 when CCTV cameras spotted Kanga Pryzborowski, 38, of Sutcliffe Avenue, Grimsby, arriving at the car park as a passenger in a silver Honda Civic.

She was seen leaving a glass table top, five carrier bags and a large plastic container next to the recycling bins.

Environmental enforcement officers traced the vehicle and served Pryzborowski with a fixed penalty notice for £400 for fly-tipping.

She failed to pay the fine and as a result, appeared before Grimsby Magistrates’ Court on 2 July 2021.

Pryzborowski pleaded guilty and was fined £215, ordered to pay a contribution towards costs in the sum of £250 and a victim surcharge of £30, making a total of £495.

The second case stems from two instances of fly-tipping in the same car park on Boxing Day and 27 December 2019.

Stephen Lewis, 61, of Lady Frances Crescent, Cleethorpes, drove to the site and left rubbish in front of the recycling bins on both occasions.

The vehicle was traced and Lewis acknowledged he had fly-tipped the waste on both occasions.

He was served with a £400 fixed penalty notice but failed to pay and appeared at Grimsby Magistrates’ Court on 8 July 2021.

Lewis pleaded guilty to the two offences and was fined £200 for each offence and ordered to pay costs of £424 and a victim surcharge of £32, making a total of £856.

“We will take legal action against people who choose to mess up our borough.

“Recycling banks are convenient places to recycle reasonable amounts of cans, glass, paper and plastic. They are not dumping grounds for all sorts of rubbish.

“Many sites are monitored with CCTV and signs are in place to warn people they can be fined if they leave rubbish next to the bins.

“Dumping rubbish at the sites means the bins can’t be emptied until the area has been cleared. This leads to overflowing bins and prevents other people from using them.

“If you have rubbish to get rid of, take it to one of the community recycling centres in Estuary Way, Grimsby, or Queens Road, Immingham.”

Earlier this year the Council started publishing CCTV images of people it would like to speak to in connection with fly-tipping offences in the area. Visit www.nelincs.gov.uk/caught-on-camera to find out more.

People who don’t check the credentials of waste carriers, can also be prosecuted if their waste is found fly-tipped. They could land themselves with a fine of £300 and possibly more if they are a business.

So far in 2021, enforcement officers have issued 17 fixed penalty notices for fly-tipping and other waste-related offences, including five for failing to give waste to an authorised carrier. More cases are due to be heard in court.

Next Article
Two in court after their vehicles were used by fly-tippers
Two people left court with a £1,020 bill after their vehicles were used to fly-tip waste at bring to recycling banks. In the first of two separate hearings, Jason Robinson, 39, of Vincent Road, Grimsby, pleaded guilty to an offence under the Environmental Protection Act. His white Ford Transit van was captured on CCTV at...
Previous Article
Just five days left to have your say on air quality in North East Lincolnshire
Local residents have just five days left to have their say on air quality in the area. North East Lincolnshire Council is carrying out a public consultation on the issue, with the responses set to inform a new approach to air quality and pollution over the coming years. Many Council services are affected by air...