Who loves their park more than Elysia? 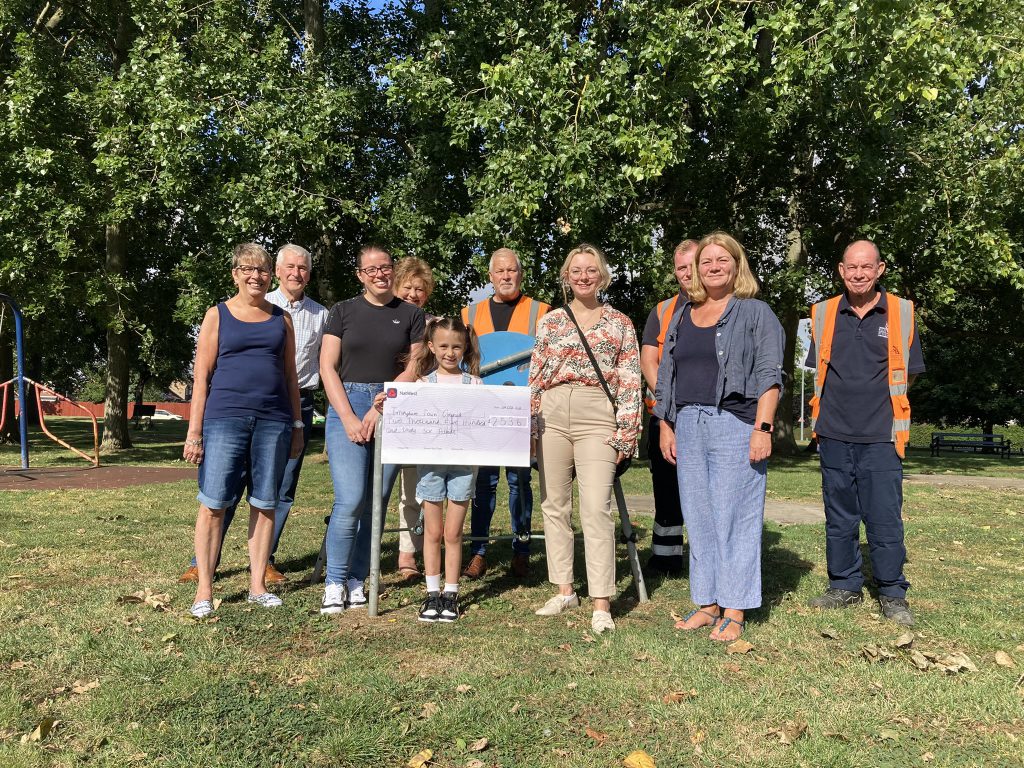 A seven-year-old Immingham girl has raised more than £2,500 for her local park after a climbing frame was destroyed by arsonists.

Elysia Nicolaou, who lives near Immingham’s Pilgrim Park, was so upset when she saw that her favourite climbing frame had been set alight, she started a fundraising campaign to help buy new play equipment.

Helped by her mum Vicky Johnson, Elysia launched her own fundraising page and asked people to sponsor her to walk across the Humber Bridge and back.

Teachers and friends from her school, Pilgrim Academy, got behind her and Elysia’s big-heartedness inspired about 50 others to take part in the walk on 19 June.

Her fundraising target was £500 but her efforts resulted in lots of donations from family, friends and businesses and she raised more than five-times that amount.

Elysia, along with her mum and nanna Nadine Haigh, handed over the donation of £2,536 to North East Lincolnshire Council’s grounds maintenance team at Pilgrim Park on Thursday 8 August.

Fittingly, the donation was made during Love Parks Week, Keep Britain Tidy’s campaign that celebrates and supports the efforts of volunteers and workers up and down the country to look after their green spaces.

“The climbing frame was my favourite thing in the park. When it was set on fire, I said I don’t understand why anyone would do that to it.

“I was already raising money for Charlie’s Hedgehog Care in Holton-le-Clay and I said can we not raise money for the park?

“I would like to say thank you to everyone who has helped me.”

Elysia’s donation will be used to buy a new spinning bowl, a springer and a trim trail at Pilgrim Park.

“As parents we are extremely proud of how caring and determined she has been throughout raising the money. She’s grown so much in confidence, and it has been amazing to watch and support her during this. We cannot wait to use the park again.”

The park is classed as a destination park and is earmarked for further improvements as part of an £800,000 plan to upgrade play parks in the borough during the next three years.

“What Elysia has done is fantastic. We’re hugely grateful to her and her friends and family for their generous donation.

“I wish there were more people like Elysia, the world would be a better place for it.

“Most people love their local parks and play areas and we are working hard to improve them so more children can enjoy playing outdoors.”

Elysia and her family said they would like to thank the following people for their support: All Elysia’s family and friends; Marcus and Carson Gowing and family; Hunter and Oban Linfitt and family; Lilly-Mai Parker and family; Scarlett and Jacob Harwood-Lee and family; George Atkins and family; Bethany Harness and family; Finley Mountain and family; Cameron Dolby and family; the headteacher and teachers at Pilgrim Academy and their families; Immingham postal workers; and Cllr Georgia Astbury and family.

Next Article
Council leader’s assurance to residents as purchase of Freshney Place is secured.
North East Lincolnshire Council’s purchase of Freshney Place has been completed today. And it comes with a firm vow from authority leader, Cllr Philip Jackson, of the authority’s intention to redevelop the centre and the area around it, with plans to offer a real mix within the urban heart of Grimsby. He also assured the...
Previous Article
Ward parish funding schemes in August
North East Lincolnshire Council and its regeneration partner, EQUANS, will be delivering a variety of works across the borough. These works are part of the Local Transport Plan scheme. The works will be carried out across four different site locations between 7:30am and 6pm. Indicative programme of works: Phase 1 – Immingham Road, Habrough –...