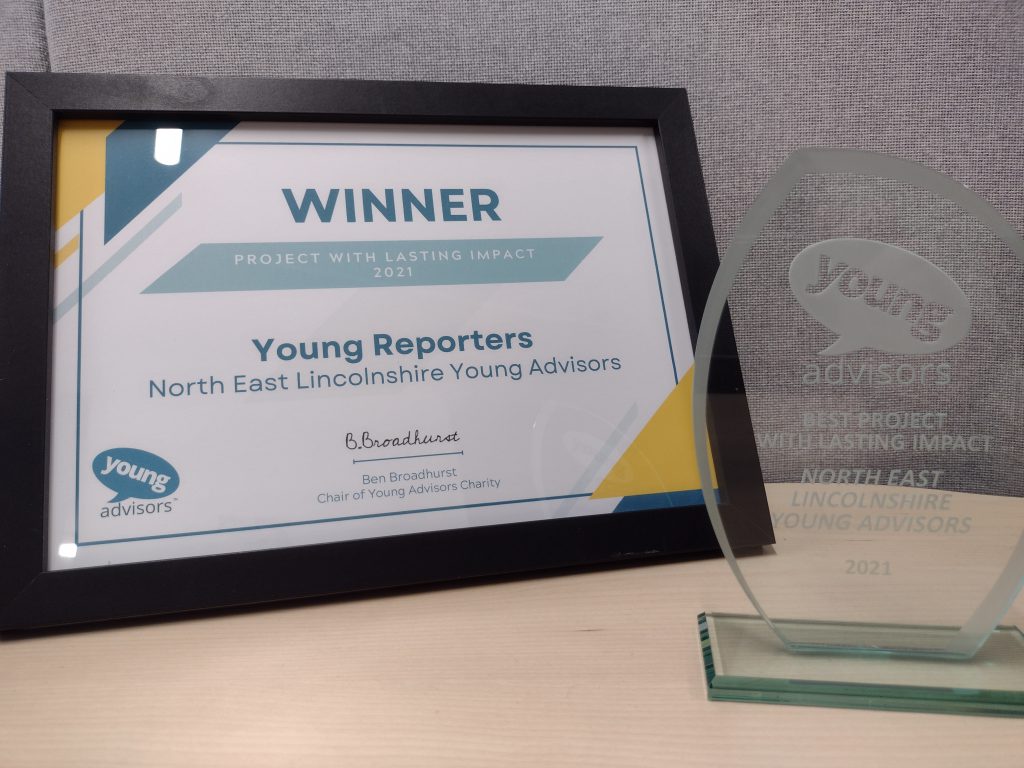 Since its launch in the spring of 2012, when the partnership between the Children’s Services team at North East Lincolnshire Council and the Grimsby Telegraph was created, more than 150 young people have seen their own columns published weekly in the daily newspaper.

Now run in partnership with VANEL, (Voluntary Action North East Lincolnshire), its popularity continues – equipping young people with the confidence, team-building and skills to succeed in the future. As a further boost on the eve of its tenth birthday the Young Reporters scheme won the ‘Project with Lasting Impact’ category of the 2021 National Young Advisors Awards.

Those on the project have gone on to careers in teaching, to study journalism, and also continued to write. Popular BBC Look North weather presenter Abbie Dewhurst was a former Young Reporter, whilst another has just started as a graduate in North East Lincolnshire Council’s Children’s Services’ Voice and Influence team to share her experiences with other young people now.

Voice & Influence Practitioner Pippa Curtin cites another great example of how the scheme has helped one young man with autism to turn his life around.

“His journey has been fantastic. When he joined, he was really nervous about being part of a small group, but he wrote a really engaging article about understanding autism from his perspective. He has gone on to join Youth Action, shared his article in front of a packed room and is a local ambassador for young people with disabilities,” said Pippa.

“When you hear stories like this it makes me realise what an honour and privilege it is, to have been part of this journey. We have all had such a lot of fun in planning the work but on a serious note it has offered the opportunity for young people who might not otherwise feel heard to have a platform to share their perspectives. To win the National award last year was the icing on the cake,” she added.

Jenny Hodson, the Youth Leadership Manager at VANEL, added: “It has been a fabulous experience working with a large number of young people with a wide interest in topics close to their hearts, from political issues to culture; from gender to sport; arts to environment. Their passion for sharing their knowledge and concerns never fails to amaze me. It keeps me on my toes researching and checking out subjects I have not often much knowledge on personally and I have learnt so much from these young people.”

The young people themselves have also spoken of the opportunities that the project has presented to them:

Olivia, now a primary school teacher, was a 2015 Young Reporter: “It is where so many things really started for me. It allowed me to really cultivate the creative energy I had from being a child and teen, and allowed me to produce something I was truly proud of. I went on to achieve a BA at The University of York in English Literature and Philosophy.”

2012 Young Reporter Louise added: “It gave me an opportunity to write. My disability means I have no speech, so I see writing as a way to express myself.”

Billy, on the scheme in 2013 is now an assistant at the National Waterways Museum: “Despite changing direction to a career orientated around museums rather than journalism, I still use the skills and experience I gained from Young Reporters on a daily basis. I can’t stress enough how much of an important part in the first steps of my career it played,” he said.

North East Lincolnshire Council’s Portfolio Holder for Children and Education, Cllr Ian Lindley said: “When you read just a snapshot of how Young Reporters has supported and helped our young people, it should fill all those involved with tremendous pride. This is perfect partnership working and I would like to personally thank those at the Council, the Grimsby Telegraph and now VANEL for ensuring this continues.”