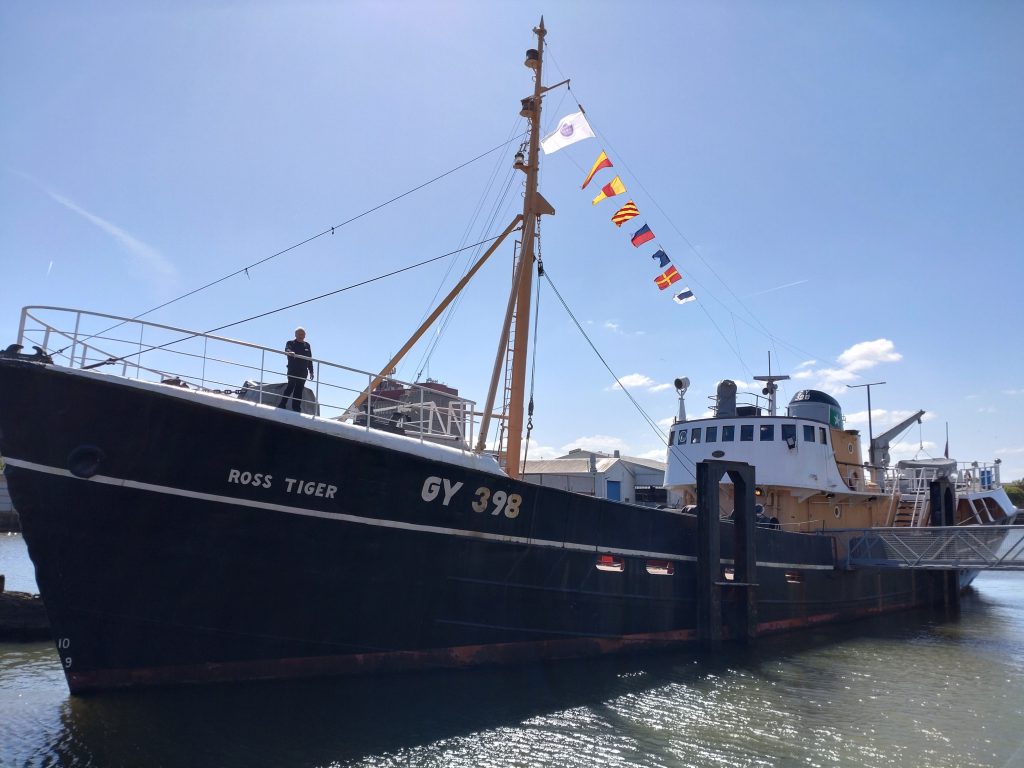 Grimsby’s Ross Tiger is to close to the public after the summer holidays for some of the most significant maintenance work to take place during the historic vessel’s time at Grimsby Fishing Heritage Centre.

The original Borneo Pine decking to the ship, laid in 1956, will be removed in its entirety to prevent the rotting timber from causing damaging corrosion to the sheet steel deck which lies beneath it.

The steel deck will be cleaned and inspected before repainting works take place.

A number of condition reports and a conservation management plan have been commissioned with Beckett Rankine Marine Consulting Engineers of London in recent years. These documents have allowed for the museum team to prioritise the most urgent works to the vessel and to plan future works as funding allows.

Works will start on Monday 5 September 2022 and the ship will be closed to the public for a number of weeks. Updates will be provided as works progress.

Ross Tiger will re-open to the public following the works, with the painted steel deck in use for visitors. North East Lincolnshire Council, which owns Grimsby Fishing Heritage Centre, is currently looking into funding options to allow for new timber decking to be reinstated to restore the deck to its original appearance. Some of the original timber that remains in good condition will be preserved and conserved in the museum collection.

David Ornsby, operations manager at Grimsby Fishing Heritage Centre, said: “The team at Grimsby Fishing Heritage Centre are delighted to be able to advance these crucial works to the Ross Tiger to help prevent further corrosion to the ship’s decking. The Ross Tiger is a tribute to the thousands of Grimsby fishermen that lost their lives in our most dangerous peacetime occupation, helped feed our nation and brought about a national dish. We hope that she will go on telling her story for many years to come.”

Councillor Tom Furneaux, portfolio holder for culture, heritage and the visitor economy, said: “The preservation of the ship is recognised as being of huge importance to Grimsby’s sense of place and identity and for supporting our tourism offer. We are proud of the people that made our port world famous and will do what we can to preserve their memory with Ross Tiger.”

The attraction will provide updates of progress with these significant works on its social media pages.