Novartis Ings – past, present and future 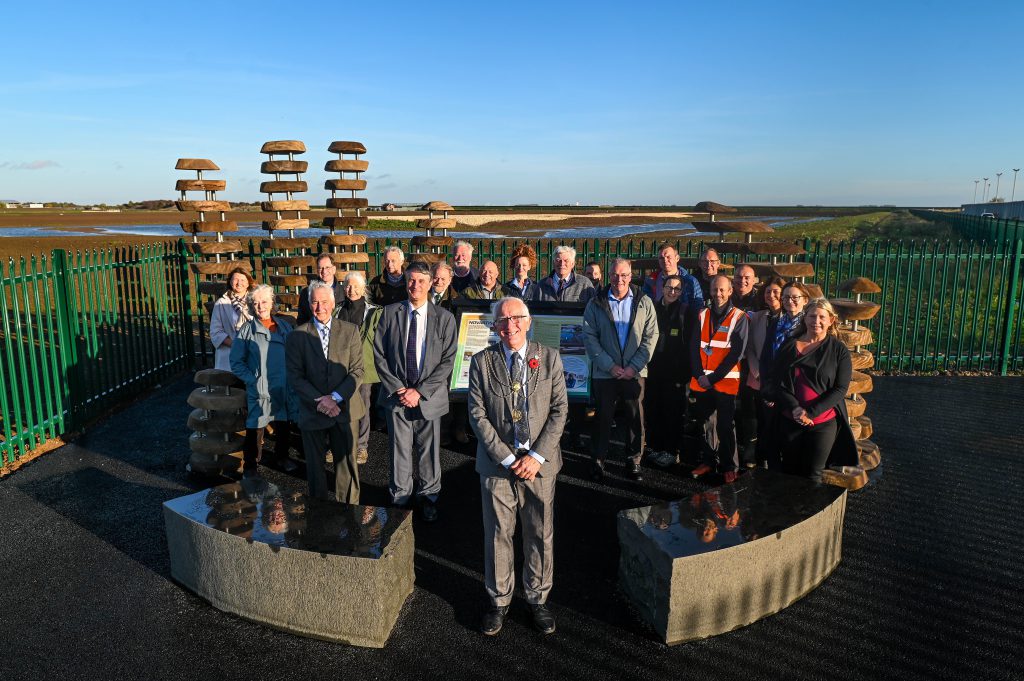 The Novartis Ings has now been completed near the shore of the South Bank of the Humber and has been formally unveiled at a short ceremony today by the Mayor of North East Lincolnshire, Cllr Steve Beasant, along with other Councillors, and representatives from Novartis, Solenis, funding partners and a range of interested groups who all helped to create the site.

The site has been developed, thanks to funding from ERDF and the Greater Lincolnshire LEP, and support from Novartis Grimsby to create a temporary stopping off point for wildlife on their migration journeys where the waders in particular can feed on the very rich invertebrate food source on the mudflats.

Large numbers of golden plover, lapwing, black tailed godwit, curlew and others also stay all winter to benefit from the relatively mild climate combined with a reliable food source revealed twice a day by the tide.  Eventually most migrate back to their Northern breeding grounds in the spring.

More than 500 curlew have been counted in recent weeks using the site, and as it becomes established over the next few years, just as more people use motorway service stations when they’re opened, more birds will use it as a haven.

The aim of the site is to provide a haven for wildlife ahead of future potential development in the area. Companies looking to expand or invest in the area would have previously been required to obtain land for wildlife to offset their developments as a planning requirement, which can delay developments for months and can be hugely expensive. Thanks to the mitigation project, the land is ready and waiting for them.

Cllr Philip Jackson, Leader of North East Lincolnshire Council, said: “This is a fantastic site. This element of our industrial investment strategy has already been praised for leading the way for future developments. Along with our other site, the nearby Cress Marsh, we’re protecting the natural environment, mitigating the impact of climate change and reducing barriers for new businesses investing in our area.”

Ian Johnson, Managing Director, Novartis Grimsby, said: “We are proud to leave this important environmental legacy to our local community.  This will permanently mark the 72 years that Novartis Grimsby has been manufacturing in the local area when the site closes in 2023.”

Halina Davies, Partnerships and Programmes Executive Manager at Greater Lincolnshire LEP said: “We are very pleased to have supported this important mitigation site, not only will the scheme ensure protection of our natural environment, but importantly will enable further development and economic growth to progress the South Humber Industrial Investment Plan and support expansion of our major South Humber ports.”

The site was created following the transfer of 35 acres of land, free of charge, from the pharmaceutical company, Novartis Grimsby.  This generous gesture was their lasting legacy to the local community after manufacturing at the site next door for more than 70 years. Land formerly owned by Solenis completed the total site area.

Family history at the site

During the build of the site over the last six months, a family with local roots came forward to tell their story. Mary Neale, who now lives in Cornwall, explained…

“In around 1910, John Johnson became a tenant farmer at Woad Farm which was owned by Sutton Estates. He married Maria King in 1912. Both were Primitive Methodists. They had 3 children – Mabel – who died of diphtheria aged 6 – followed by Nancy and Ron. John and Maria are my direct grandparents, Nancy was my mother.

In the 1930s and ‘40s, John and Maria Johnson farmed this land – they had cattle, horses, turkeys and a few crops. At that time, it was known as Woad Farm, or sometimes called ‘the Wadd’.

After the outbreak of the second world war, Ron joined the Home Guard but lived on the farm to help his parents, and Nancy went to Edinburgh as a nurse.

In June 1943 the Luftwaffe dropped anti-personnel butterfly bombs on Grimsby, killing more than 60 people, but some landed in the adjacent fields. The army searched the surrounding farmland to make sure that the area was safe.

However, on 18 May 1944, just days before his birthday, my grandfather, John, and a young farm boy, Sydney Russell, aged 14, were working on land with two horses when they ploughed up a bomb which exploded killing them all.

My Grandmother, Maria, carried on at the farm until 1949, helped by her son Ron, but eventually they moved from the farmhouse into Great Coates village.

The farmhouse was flooded in the storm surge of 1953, and was eventually demolished but the trees that surrounded the house and farm buildings are still standing and can still be seen where it stood in the site.

Ron continued to farm the land and worked for Sutton Estates until his death.

My mother would be so pleased that this is now a safe and peaceful wildlife area.”

Public art at the site

The giant “hands” that used to grace the entrance to the Novartis Grimsby site have been transported to the new wildlife haven as a permanent reminder of Novartis and their long history.  This wooden sculpture (best appreciated by an overhead view as photo) was commissioned in 2008 to mark a key event on site.  The celebrations included a competition to convey the Novartis vision of ‘caring’ through its medicines, and the winning entry was brought to life by local wood artist Darren Capp.

To mark the opening of their newest production building in 2005, Lincolnshire artist Dan Archer was commissioned to design a feature reflecting the successful partnership of all involved.  His sculpture comprised of five granite benches set in a circle surrounding a central obelisk, representing togetherness.

Two of the benches have been relocated and now provide seating next to Novartis Ings.  One is engraved with the Pyewipe bird (see photo) symbolising the local area and which we have adopted as a logo over many years.  The other shows C for Carbon from the chemical periodic table, the basis of all process chemistry carried out at Novartis Grimsby and the element on which all life on earth is based.

‘Novartis Ings’ was chosen following a competition at the Novartis site to name the mitigation land.  The word ‘Ings’ is of Norse origin referring to water meadows and marshes, including those that were part of the Humber flood plain, so fits perfectly!