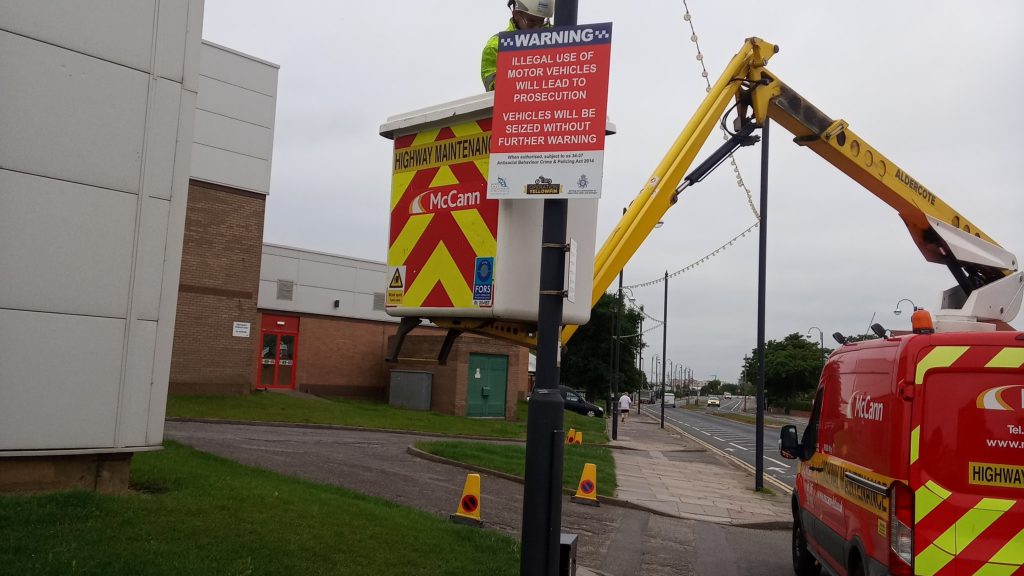 Our communities continue to report concerns about drivers and motorcyclists riding along the roads of North East Lincolnshire in an antisocial way.

In response to their concerns the local neighbourhood team has been working extensively with the Anti -Social Behaviour Team at North East Lincolnshire Council for some time. We have already increased both foot and vehicle patrols and have done a lot in recent years through Operation Yellowfin to reduce road related antisocial behaviour.

A number of fines have been issued for offences of this nature in areas which are subject to Public Space Protection Orders and, through our HumberTalking surveys and community policing, we have gathered helpful information and evidence submitted to us by the public, we have also been able to retrospectively issue warning notices, in some cases resulting in vehicles being seized.

Using the powers under Road Traffic Act 1988 the Anti-social Behaviour, Crime and Policing Act 2014, the police have the power to stop drivers suspected of motoring offences such as driving in an antisocial way, ‘causing alarm, distress or annoyance’ and order them to leave an area and not return within 48 hours.  Their vehicle can also be seized for this same period of time.  If not adhered to drivers and riders could risk their vehicle being seized and if not collected, crushed.

CCTV is installed in identified locations as well as increased speed detection resources which have enabled us to identify those responsible and acts as a deterrent for further offending.

Now in addition to this work, North East Lincolnshire Council is installing signs in relevant areas along Cleethorpes Seafront, People’s Park, Immingham, West Marsh (linked to the Safer Streets Home Office project) and the Nunsthorpe Estate.  These signs will advise drivers that their vehicles are at risk of being seized if found to be driven in an anti-social manner.

Neighbourhood Policing Chief Inspector Paul French said, “Working closely alongside the Local Authority and Humber Fire and Rescue we hope to have a huge impact in improving the lives of local residents and disrupting these riders and drivers disruptive behaviour.

“All of the existing measures and this new signage really does demonstrate our commitment, along with our communities, to tackle this type of anti -social behaviour.

“It should also act as a signal to those participating in this kind of activity that we will prosecute anyone found to be driving dangerously and posing a risk to our local communities.

Humberside Fire and Rescue have been an instrumental part of this activity, the use of a drone in tracking vehicles has led to a number of riders being caught and in one case a rider was tracked all the way to their home address where they were arrested and their motorcycle seized.

“We know how proud some young people are about their motorbikes and cars so we would advise them to be responsible and drive in a safe and legal manner.  Otherwise it might be their pride and joy which is seized in this way.

“We would urge the public to continue to give us as much information as they can to assist us in bringing this unacceptable behaviour to a stop.

“Please call us with any information about where and when this is going on, and if possible, who is committing these potential offences, and where are these offending vehicles being kept.  When the community works with us and provides this type of information it helps us to better direct our resources and work together to solve the problems causing the greatest concerns in our neighbourhoods.

“If you have concerns in your area relating to anti -social behaviour then please call us on 101 or in an emergency on 999.”

Cllr Swinburn said: “This is a really great example of the Council and the Police listening to the concerns of residents and taking action.

“Since receiving complaints about nuisance drivers, we’ve worked extensively with the Police to put measures in place.”

Cllr Shepherd added: “Residents will be seeing more police out on foot across the area, and more signage in place. We are also using more and more CCTV footage to identify the offenders and have already had some success in seizing vehicles and fining the individuals responsible.

“Our officers are also working closely with the communities where this issue is most prevalent to try to identify what more can be done to limit these nuisance drivers.

“I’d like to take this opportunity to thank our colleagues in Humberside Police for their work with us on this issue.”